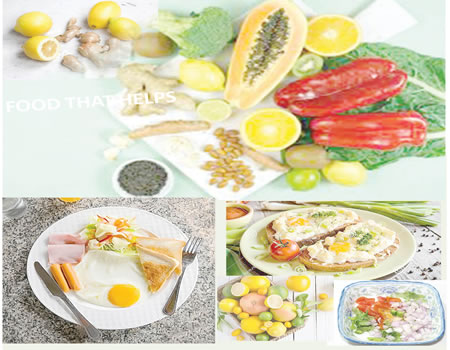 There are certain food that will keep your immune system strong. They can help prevent colds, the flu, and other infections because they contain antibodies that are needed daily.

Most people don’t have a second thought after they have caught a cold, they just take vitamin C immediately. Rather than use the pills, you can be assured that these fruits would help keep your body resistant to the viral infection.

Red ball pepper: People have oftentimes condemned pepper, arguing that it contains no nutrient. But that’s not true. Vitamin C is largely contained in any fruit or vegetable, and red bell peppers contain almost 3 times as much vitamin c.

Garlic: It is very effective in fighting infections and it helps to slow down hardening of the arteries.  Most people add garlic to herbal mecidines because of this belief.

Ginger : It helps decrease inflammation, reduce a sore throat and inflammatory illnesses. Ginger may help with nausea as well. While it’s used in making many desserts, it’s another fruit loaded with vitamin C.

Pawpaw:  The fruit contains digestive enzyme called papain that has anti-inflammatory effects. It contains potassium and magnesium, which are both beneficial to overall health.

Bread is not boring!

This is how to make Egg bread toast with veggies.

I bought a loaf of bread last week and as dinnertime got closer,  I was sure I didn’t want to eat just regular toast or bread and tea.

So for a minute, I took a step and checked to see what I had in the fridge.

There was carrot, cucumber, pepper, egg and garlic. And with that, I set the ball rolling, ready to make something new and tasty

First cut all veggies (carrot, garlic and cabbage -if you have) except cucumber

Wash with water  in the mixing bowl

Add all veggies together, set aside.

Get another bowl, batter the egg and a pinch of salt

Mix egg with chopped  chilli or red pepper, mix well and keep in another bowl

Remove and put in a plate

Now add butter or little oil to the pan ,put mixture of veggies, add very little seasoning, let it shimmer for a minute

Pour eggs and pepper content (this has salt already)

Then top up with cucumber or tomato

Put back the bread on the pan and press together. Make sure the pan is greasy

Abiodun: One year of hardwork in Ogun

WITH CARROT CAKE, YOU TASTE GOODNESS

A PORTION OF PLANTAIN POTTAGE