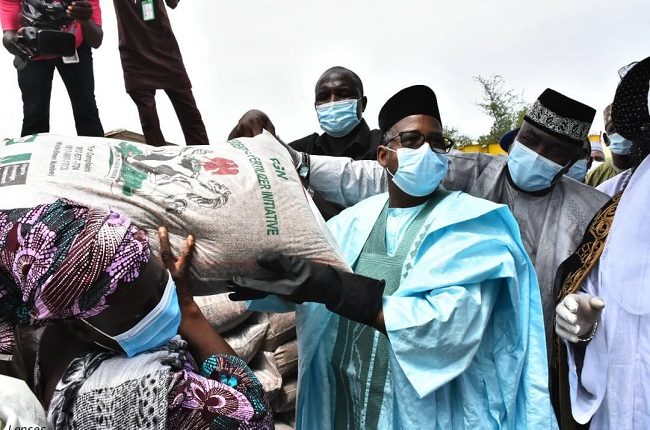 In its resolve to boost agricultural production to enhance food security, Bauchi State government says the arrangement is to access N10 billion commercial agricultural credit scheme from the Central Bank of Nigeria (CBN).

The disclosure was made by the State Governor, Sen Bala Abdulkadir Mohammed at the official launching of the 2020 farming season, sales of fertilizer and the distribution of OCP Africa COVID-19 Palliative Support Project to farmers across the state held in Bauchi on Saturday.

The Governor who said although the state was not initially included into some federal government major agricultural programmes, however, noted that, with government’s concerted efforts, the state has now been included into the National Livestock Transformation Plan and Livestock Productivity and Resilient Support Project.

According to him, the state will also benefit from the World Bank Agro-processing, Productivity Enhancement and Livelihood Improvement Support Project, an initiative of the Federal Ministry of Agriculture and Rural Development.

Bala Mohammed further said that in order to revolutionize the sector and to right the wrongs of the past, his administration has started settling the N700million inherited debt on fertilizer incurred by the last administration to the Nigerian Sovereign Investment.

He said that under the agreement, Bauchi state is able to get out from the black book of the agency as it is now relisted to continue benefitting from the NPK Presidential initiatives.

The Governor then announced the procurement of organic fertilizers worth 99,000,000:00 to support farmers to increase their output in addition to the purchase of the assorted grains worth N150 million as part of the strategic grain reserve program.

He added that “you will be recalled that, last year, a similar ceremony was performed just a few days into the life this administration in Katagum, Zaki Local Government to be precise, where we provided enough fertilizer to farmers, purchased chemicals against agricultural pests as well as supplementary measures provided to control quela birds”.

The Governor also stated that ” The event in Zaki laid the framework for our agenda at boosting agriculture in all its ramifications in the state. I am glad to inform you that we have started implementing our agricultural policy and it yielding positive result, the Bauchi State Fertilizer Company will bounce back into full-scale operations soon.”

He further said that the state government has repaired some of the abandoned tractors and implements apart from the measures taken to re-organize the tractor hiring services to make it more viable and sustainable.

He, however, noted that already private agricultural service providers have been engaged to cover all the 20 Local government areas of the state to ensure the effectiveness of the tractor hiring scheme.

“A total of 5,000 farmers have been registered and each of them will receive 2 bags of NPK fertilizer totalling ten thousand bags at a subsidized rate under the OCP Africa COVID-19 palliative support to the state”, he explained.

” The centres have been selected and renovated for the programme at Alkaleri, Ningi and Shira Local Government Areas to take care of the three Senatorial Districts, OCP is also in collaboration with BASAC to develop one-stop-shop in five locations in the state to ensure a constant supply of fertilizer, agro-chemicals and other inputs”, the Governor added.

The Governor said the state government has restored collaboration with OCP Africa of Morocco to develop the agricultural sector in the areas of school laboratory project, Agribooster project, expansion and upgrading of the Bauchi Fertilizer Company among others.

Governor Bala Mohammed on of the sales of fertilizer said NPK and Urea would be sold at the rate of N5000 and N7000 respectively subsidizing the commodities for the Farmers as a means of alleviating negative effects of COVID-19 pandemic.

Earlier, Commissioner of Agriculture and Rural Development, Pharmacist Samaila Burga said that the ceremony was just the normal official practice but that selling of fertilizer and other farming components have begun since the setting of the wet season.

Samaila Burga also said that the government has released the sum of N200m for the purchase of items required to boost food production in the state stressing that the focus is on attaining food sufficiency on the state.

The Commissioner further disclosed that within the last one year, the government has ensured release and payments of all counterpart funds as well as revamp the BASAC which had been moribund over the past years aimed at boosting the agricultural sector of the state.

We never had it this bad in Nigeria, says Sanusi