Flush out criminals among you, Akeredolu warns Ebira community in Ondo 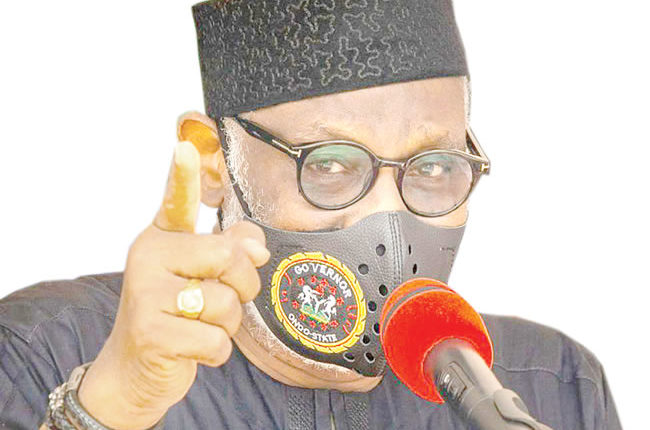 Governor Rotimi Akeredolu of Ondo State has warned Ebiras living in the state to flush out criminals among them, urging them to join hands with the government in ridding the state of crime and criminals.

Akeredolu, who stressed that the Ebira people have lived together with the indigenes of the state for long, charged them not to deviate from the farming trade.

The governor, who stated this on Saturday, while meeting with the leaders of the Ebira community in the state at the Cocoa Conference Hall of the Governor’s office, Alagbaka, Akure, urged the Ebira leaders to warn their wards against venturing into the kidnapping business.

Addressing reporters shortly after the closed-door meeting, Akeredolu informed that the meeting was summoned in the light of the recent development of the June 5 attack in Owo and other kidnapping cases in the state.

He disclosed that the leaders of the Ebira Community have been urged to rid themselves of criminals and deal with the situation the best way, so as to protect their name and integrity in the state.

“We summoned this meeting with our brothers. They are not new here but because of the recent developments that have to do with the Owo massacre and kidnappings, we have to call ourselves.

“It is clear that the message from us to them is well understood and we have assurance from the Ebiras who are living in Ondo State that they would corporate with the security agencies and that the incident in Owo was something that they themselves felt very bad about.

“I also have received a letter from Ohinoyi of Ebiraland, that is the leader of Ebira in the World, commiserating again and expressing his own embarrassment on what happened.

“So, we leave here today with the belief that our brothers, Ebira that are here, would at the least work to ensure that there is security in Ondo State and in doing that, we have charged them to discuss with all their people.

“They have assured us they would do that and we want to call on our people that at least, let us continue with our brotherliness and maintain the good relationship we have had with them in the past.

“We believe that it is not those who are residing here that came to perpetrate this crime. That is what they have said and we should give them another chance.

“Let us live together in peace and I hope and pray that the Ebiras who are here in Ondo State will work with the government and security agencies to make sure that criminals are flushed out within our midst and they have our cooperation in whatever way they wish,” he noted.

The leaders of the Ebira community were led by the Odeyani Anabira, Zubair Dan Musa and Alhaji Chief Abdulazeez Majeobaje Akure, State Chairman of Ebira.

The Deputy Governor, Lucky Aiyedatiwa; Assistant Inspector General of Police, AIG Zone 17, Mr Yusuf  Mohammed Akeera; Heads of Security Agencies; members of the State Executive Council; and Chairmen of the six Local Government Councils in the Northern Senatorial districts of the State were also in attendance.