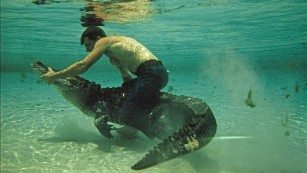 A two-year-old Nebraska boy killed by an alligator at a Walt Disney World hotel in June died due to a series of events that would have been difficult to predict, according to a report the Florida Fish and Wildlife Conservation Commission released Monday.
The report detailed why it considered the attack a predatory event rather than one provoked by human behavior, and the possible reasons for it. But it did not address what role Walt Disney World’s policies or lack of them possibly played in the death of Lane Thomas Graves.
Two guests said they warned Disney employees there was an alligator near the beach where the Graves family had gathered to watch a movie, according to the report. It, however, did not determine whether the employees acted on the information, CNN said.
Authorities said they are confident they caught the offending alligator but acknowledge they are not sure. In the end, the findings of the report indicate the victim was an unfortunate match for a specific predator seeking prey, and his family had no warning the child was in any potential danger.