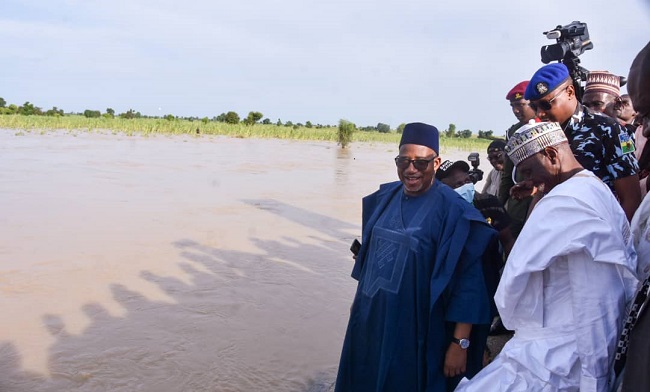 Three people have been confirmed killed by serious flooding in Zaki and Gamawa LGAs of Bauchi State while houses, farmlands and other valuables were washed away.

Also, roads and culverts as well as bridges were cut off thereby forcing residents of the areas affected to use canoes to be able to move from one side to another.

The flood disaster washed away six potions of the road linking Zaki and Gamawa local governments of the State.

Bauchi State Governor, Sen Bala Mohammed Abdulkadir on Saturday paid an on-the-spot assessment visit to the area lamenting the extent of the devastation.

The Governor called for a collective effort in addressing the devastating effects of the incessant flooding affecting communities across the state.

The incident according to the State Environment Protection Agency (BASEPA) killed three people, and destroyed over 1400 houses, farm produce and properties.

Speaking after inspecting the level of damages, Bala Mohammed who lamented that the communities are exposed to the danger of flooding noted that year in year out, losses of lives and properties are being recorded.

The reiterated his call on the federal government to as a matter of urgency assist the state in providing a permanent solution to the problem, and also provide palliative measures to the victims.

While presenting relief materials of two trucks of maize and medical consumables, the Governor also directed the State Emergency Management Agency (SEMA) to take inventory of the damages to enable government to take further actions.

The Director General of the State Environmental Protection Agency (BASEPA), Dr Ibrahim Kabir warned the communities to relocate to safer areas to guarantee their safety.

The incident came after the report of the Nigerian Meteorological Agency NIMET predicted continuous heavy downpours in most parts of the country.

Seven signs that you may be dating yourself