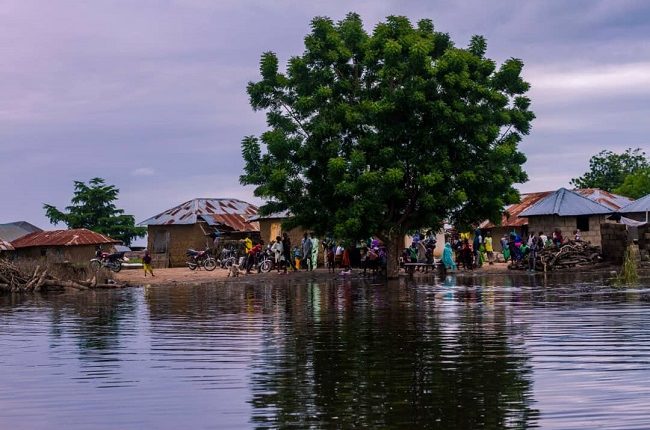 Over 100,000 hectares of rice, maize and millet farms have been destroyed by ravaging flood in Pategi town, Patigi local government area of Kwara State and its environs.

Also, more than 3,000 residential buildings were also submerged by the flood which had reportedly rendered a great number of people homeless, including women and children.

Speaking with one of the residents of the area on the perennial flood, Mallam Ismaila Adamu, said that flooding is not a strange disaster in Pategi.

“But, this time, it came like a thief in the night entering every house and drowning people and taking away their belongings.

“The flood also submerged schools, hospitals and other infrastructure found on its way including electric poles and pipe-borne water schemes”, he said.

At Gbaradogi, a settlement three kilometres away from Pategi town was also submerged in the flood.

Muhammed Isa, who is married to two wives with 13 children, said that he lost all his means of livelihood to the disaster.

“It wreaked no less havoc on over 100 communities like this.

“Though no lives were lost to the flooding, the people’s immediate need is pipe borne water”, he said.

The people, who called on the state government to assist in relocating them to another place, appealed to the government to dredge the river causing the flood to prevent future occurrence.

Meanwhile, the Kwara State government has commiserated with the victims of flooding, which affected some communities in the state.

The State deputy governor, Mr Kayode Alabi, who was on an assessment tour to flood-affected parts of Edu local government area of the state, assured the victims of the government’s support to alleviate their condition.

Speaking at the palace of the Emir of Lafiagi, Mr Alabi expressed sympathy on behalf of Governor Abdulrahman Abdulrazaq and the government of Kwara State to the victims of the flood disaster.

He said the government would do everything possible to support the victims back to normalcy.

The Emir of Lafiagi, His Royal Highness, Alhaji Saidu Kawu-Haliru appreciated the state government for the sympathy visit and solicited for a permanent solution for the people in the area.

Speaking on behalf of Chewuru Community, Mallam Umar Aliyu explained that the people of the community were still counting their losses following the downpour at the weekend which he said displaced the community and destroyed their farms.

Mallam Aliyu appealed for the relocation of the people of the community, stressing that they are willing to move to a safer place.

Edo Poll: PSC urges Police deploy for election to operate within the law