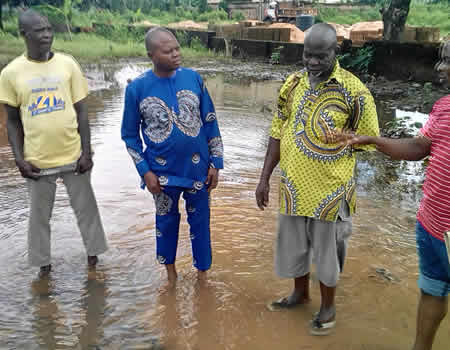 Barely a week after schools in Anambra state resumed for the next educational session, a flood suspected by leaders of Okukwa village, Ameasea in Awka North local government of the state to be mysterious has flooded the entire school premises of Ezigbo Primary School Ameasea thereby preventing 650 students and their teachers from accessing classrooms.

Despite heaps of gravels erected by the school management few days ago to lead teachers and pupils to their classes, only few of them could dare pass through the entrance to their classes for fear of been swallowed by the mysterious water that is oozing out of the entire classrooms.

Speaking on the flooding, the school Headmistress, Mrs Leticia Umeadi, appealed to the Anambra state ministry of environment and other related agencies in the state to come to their aid as access to classrooms have been taking over by the mysterious water.

She also appealed to the elders of the community to go spiritually to ascertain circumstances surrounding the ugly thread before something terrible than this would happen in the school.

She noted that for the past 12 years as the Headmistress of the school and indigene of the community, she has never witnessed such an occurrence in the life of the school.

ALSO READ: We have saboteurs working against Buhari’s govt ― Osinbajo

As I am talking to you pressmen now, the entire school documents have been affected by the flood, she worried.

Some of the teachers who could not speak before the newsmen as a result of their civil servant status called on the Lawmaker, representing Awka North/South Federal Constituency, Hon. Sam Chinedu Onwuaso and his counterpart in the state House of Assembly representing Awka North Constituency,  Hon. John Nwokoye, to come and fulfilled part of their electoral promises to the ill-school.

The Secretary-general, Ameasea Development Union, Comrade Okoye Maduka, who frown over the situation, also appealed to the state governor, Chief Willie Obiano, to as a matter of urgency order the state Ministry of Works and other concern authorities to act first before it will get out control.

Mr Obi Martin, a resident in the community who live behind the affected school, on his part, attributed the mistery to Aba-Owelle stream located in a distance of eight electrical poles from the school.

We have saboteurs working against Buhari’s govt ― Osinbajo