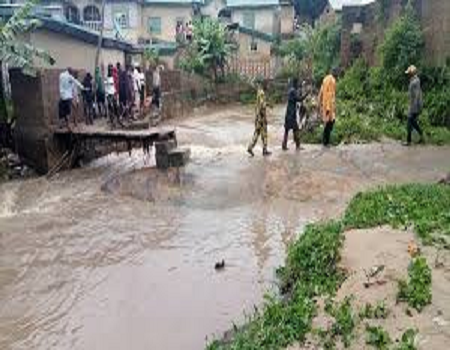 A final year student of Adekunle Ajasin University, Akungba Akoko, (AAUA) in Ondo State, identified as Doyin Boluwaji was on Monday evening swept away by a heavy flood in Igbaka area of Akungba Akoko in Akoko Southwest Local Government Area of the state.

The incident happened when the victim, a final student from the Department of Religious and African studies, tried to move out of her house but got stuck in the flood accompanied by torrential rain before she was swept away by the flood.

Nigerian Tribune gathered that the downpour which lasted for several hours swept away the young lady while her landlord, Elemukona Ademola, escaped by climbing a tree very close to his house.

According to a source, the residents of the house which was close to the canal has been experiencing flooding but said the building was flooded following the heavy downpour.

He explained that the house was  flooded on Monday evening and the victim tried to leave the house in order not to be trapped in the flood but slipped in the process while she was swept away into the canal.

He said some people who rushed to the scene of the incident in an attempt to save the girl, could not rescue her, as she had been carried away, saying all efforts to search for the victim were not successful while the community organised a search party to look for the body of the student.

He, however, said the body of  Boluwaji has not been located or recovered at the time of filing this report.

Confirming the development, the spokesperson of the AAUA, Mr. Victor Akinpelumi who described the incident as unfortunate, said efforts are being made to locate the victim by some local divers.

He said the management of the school led by the Deputy Vice-Chancellor and some other principal officers had visited the home of the victim while efforts had been put in place to search for her.

He also disclosed that the parents of the student have visited the scene of the incident saying, “the incident happened outside the school campus, but we have put in place some efforts to recover or locate the girl”.

Similarly, officials of the Ondo state government led by the state Commissioner for Agriculture, Mr. Gboyega Adefarati, visited the scene of the incident.

While sympathizing with the people and residents of the area, Adefarati warned the residents against the blocking canal with dirt and refuse in order not to block the drainage.

The traditional ruler of the town, the  Alale of Akungba, Oba Sunday Adeyeye Ajimo, appealed to all relevant authorities, especially the State,  Federal government and NEMA to come to the aid of the people affected by the flood.

Power will return to South West in 2023 ― Cleric