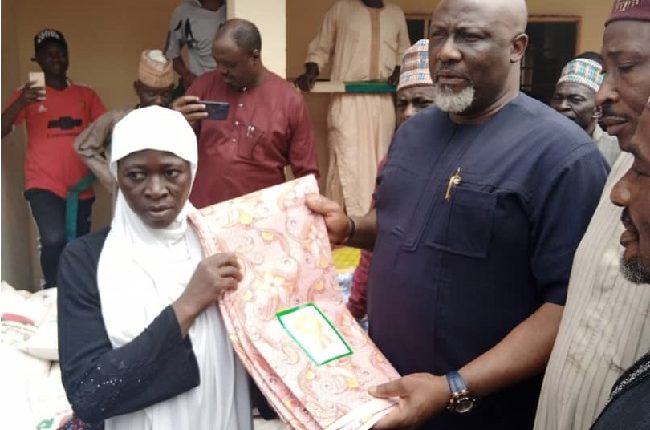 A three-time member of the National Assembly, Senator Dino Melaye, through his foundation, Senator Dino Melaye Foundation (SDMF) has donated over N10 million relief materials to 2000 flood victims in Lokoja and Koton-Karfe federal constituency to cushion the effect of 2020 flood disaster in Kogi State.

Speaking during the distribution of the items which include bags of rice and wrappers at the palace of Ohimegu Ogu in Koton-Karfe local government area, Melaye assured the victims that he would never relent in his effort to reach out to people in periods of needs.

He noted that, if the government at all levels had done the needful, the plights and the difficulties the victims of flood are passing through annually would have been reduced.

Melaye who went round the designated Internally Displace Person’s (IDP) camps in Lokoja, Koton-karfe and Gegu Baki, attributed the plights of victims affected by the 2020  flood disaster in the state to the failure of the government in putting measures in place to mitigate the annual flooding of the River Niger and Benue.

The former Senator who represented Kogi West Senatorial District in the 8th Senate said with or without political appointment he would continue to lend his support to the vulnerable and people who are less privileged, saying  “it is religious to always be your brother’s keeper”

“As a member of the Peoples Democratic Party (PDP), the party believed in meeting the needs of the people. The flood that ravaged the areas this year is most unfortunate and it behoves on well-meaning citizens to come to the aid of victims” he said.

Senator Melaye described the flood as a natural occurrence, but said with proactive measures in place, the plights of the people usually affected would have been mitigated and with reduced losses.

He said the gesture was borne out of his affection for the people whether in or out of the office and promised to continue to give a helping hand to the people.

“This gesture which cuts across the two local government areas in Kogi West has no political colouration, but out of love and compassion for the people devastated by flood,” he stated.