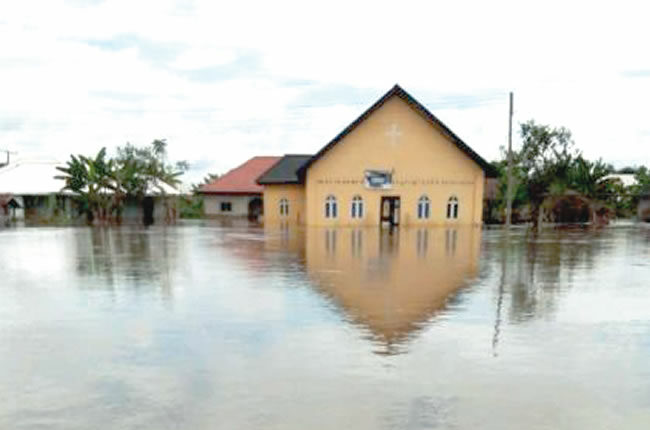 Restrictions of inter-state movement of goods and services by the ravaging flood across Nigeria have led to sudden hike in prices of staple food and petroleum products in Yenagoa, the Bayelsa State capital.

The affected items are sachet water which residents depend on due to absence of potable water, grains and food condiments, among others.

Nigerian Tribune’s survey at markets in Yenagoa showed that over 100 per cent increase in the prices of garri, yam, tomatoes and other food items.

At popular Swali and Tombia market, it was learnt that a four-litre plastic container measure of garri which sold for N1,000 few days before the flood in Yenagoa, now sells at N2,000.

The East-West road connecting over six states in the Niger Delta had been submerged with many passengers stranded on the highway, just as many communities in Bayelsa.

The school management said that temporary services will be rendered at the Diete Koki Memorial Hospital, Opolo for the time being until the flood recedes.

The situation, according to reports, has led to the hike in price of Premium Motor Spirit (PMS) in Yenagoa, causing transportation fare to skyrocket.

“The worse of it is that there is no help from the state and federal government to salvage the situation. The government has also refused to declare a public holiday at this period and paying transportation to work is tasking,” Samuel said.

Nigerian Tribune gathered that the state governor, Senator Douye Diri, has urged the Federal Government to declare a national emergency on the rampaging flood that had devastated lives and properties in the state and others in the country.

Senator Diri made the call at a security council’s meeting in Government House, Yenagoa.

He said the essence of the meeting was to brainstorm with heads of various security agencies to assess the situation holistically and seek ways to mitigate the impact of the natural disaster.

Diri cautioned those he described as peddling false information and protesting over a water channel project undertaken by the state government at the Okutukutu and Opolo axis of Yenagoa, to desist from the act.

Girls counselled on self esteem

Environmentalists, tourists raise concerns over hunting of chimpanzees in Nembe