The flood has taken over the premises of some public utilities including hospitals, schools, and churches in the community.

Three children of different parents – a girl and two boys – identified as Annabel, Gift, and Praise-God, have reportedly drowned in the flood. 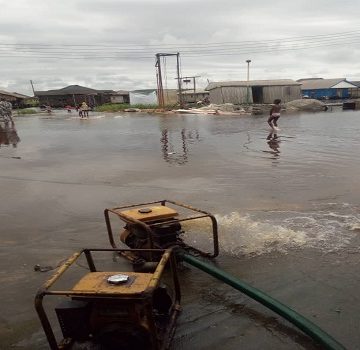 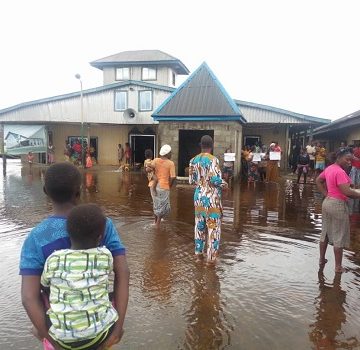 Women and youths with different placards in the flooded church.

The community, therefore, called on the government at all levels, IOCs as well as the international community to intervene by dredging the inland waterways to prevent a future occurrence.

Folks of the Ijaw community, during a mild protest at the weekend, captured their plight in placards with inscriptions such as “no farm, no food because of the flood. Government! help us,” Government, come to our aid, the flood has damaged our properties,” “flood has damaged all our church instruments,” they displayed.

ALSO READ: Osinbajo, Fashola: Carrying the can for others…

Addressing the protesters, the Secretary-General of Polobubo National Council, Mr. Midwest Kukuru, described the development as “agonizing, harrowing and disturbing.”

According to him, the river in the community used to be a “very deep freshwater habitat, until a few years after the advent of oil companies, particularly Chevron.

“We began to have these problems. This problem is caused by the canal that was dug into the Atlantic Ocean. The silts from the ocean come through the canal and are deposited in this river.

“During the dry season, this river is less than one meter. Because it is silted, when the rain falls, the water has nowhere to go than to begin to overflow the banks, go into houses and begin to cause problems. This, in a nutshell, is the cause of it.

“We are appealing to the governments – local, state, federal and even the world, to prevail on Chevron to open up this our river for us.

“First of all, they need to block that canal that they dug to the Atlantic ocean, then dredge the whole of this river and get it to the normal depth that it was before.

“Then, there are areas they need to fill with sand for this community to relocate to because we have studied reports that say that the whole of the community is sitting below sea level.

“For those reasons, we are asking the world, the FG, to urgently prevail on Chevron to reclaim a particular place for Tsekelewu-Polububo people to stay on.

“Having dredged it, we need it piled so we don’t have this yearly problem. The flood we had last year was less than what we have now.

“It is expected that by next year, it is going to be far greater than what we have today. Now the people cannot lay hands on anything,” Kukuru enthused.

On the community’s flooded Cottage Hospital, the Medical Director, Dr. Terry Itimi, told journalists that because the theatre had been overtaken by flood, patients had to be moved from the wards.

“No surgery can occur at the moment. It is very important that the government or whoever is in charge come to the aid of this people because this is the only functional hospital around this Polobubo vicinity and people come from all areas around here to get medical care.

“With the way the water is going, sometimes, it is up to knee level in the hospital.

“Two days ago, we had emergency surgery for a woman, but due to the unhygienic state of the facility, we couldn’t carry that out.

“There are other cases we have to refer to urban areas which are very far from here,” the doctor lamented.

A tutor from the flooded community’s primary school, Miyen Primary School, Alice Gbalubi, also bemoaned the plight of the teachers and pupils since resumption.

Pointing at the flooded premises of the school, she reiterated that “as you can see, the school is flooded with water. We have resumed but the pupils learn about water.

“They stand because we don’t have chairs as you can see. Before the close of the school, many develop a cold, fever and begin to vomit. Even teachers cannot dress properly because of the water.

“We don’t wear shoes, but walk barefooted. Most times, their (pupils) books fall on the water and get destroyed. We want the government and Chevron to come to our aid.”

The pastor of the flooded First Baptist Church, from which water was being pumped out, at the time of visit, Rev. Kenneth Toruwei, said the church lost most of its instruments to the ravaging flood.

He pointed out that a jetty in front of the church building had been submerged in the water.

Meanwhile, the parents of two of the three children who allegedly drowned in the flood, Mr & Mrs. David Suku, explained and decried the untimely demise of their kids, calling on the government to comfort them.

SUVs for lawmakers: Don’t expect us to use our personal cars for oversight functions —Namdas

Declining English language use by Nigerians and sundry issues