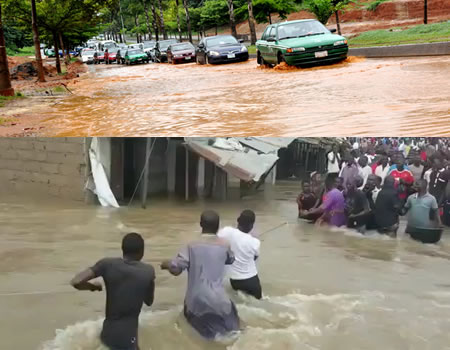 THE Federal Capital Territory Administration, is set to commence a temporary access road to Lokogoma Estate as a way of easing current hardship and losses faced by the residents of the area.

This was in response to the flood incident in the area that claimed the lives of Mr. Kenneth Nwogu and his two children on August 17.

FCT Permanent Secretary, Mr. Christian Ohaa, made this known while addressing residents of the several estates in Lokogoma who staged a peaceful protest at the FCTA Secretariat.

He noted that the FCT minister, Malam Muhammad Musa Bello and the entire administration were seriously saddened by the incidence and have, therefore, directed the FCDA and relevant departments to quickly provide palliative measures to enable residents safely access their homes at all times.

The FCDA Director of Engineering, Engineer Ahmad Hadi,  led a strong delegation of top FCTA officials, including Directors of Departments of Development Control and Facility Management and Maintenance and staff of Gilmor Contractors on inspection tour of the estate.

He noted that huge work was required for a temporary access road, adding that they were willing to move into Lokogoma for infrastructure provision but however, 20 to 30 per cent of property in Lokogoma was already sitting on right of ways, meaning that such structures would eventually have to go to make way for “full scale works” in line with the provision of the Abuja Master Plan.

“We have already called in Gilmor Contractors to come and assess the condition of the road and come out with the best palliative we can have. And I am sure you will all be happy when we are done”, he added.

Hadi also called on residents of Lokogoma to stop blocking waterways by dumping refuse into them and blocking of drainage systems where they existed.

Earlier, Chairman, Lokogoma District Residents’ Association, Mr. Joseph Nnorom commended the administration for initiating mass housing programme to solve housing problems of the people, adding that the “objective has been partially met” because the public came in and built estates.

Regretting the dearth of social amenities such as health facilities, pipe borne water and good road network at the estate, Mr. Nnorom called on the FCT administration to quickly do the needful.