• to provide them with relief materials 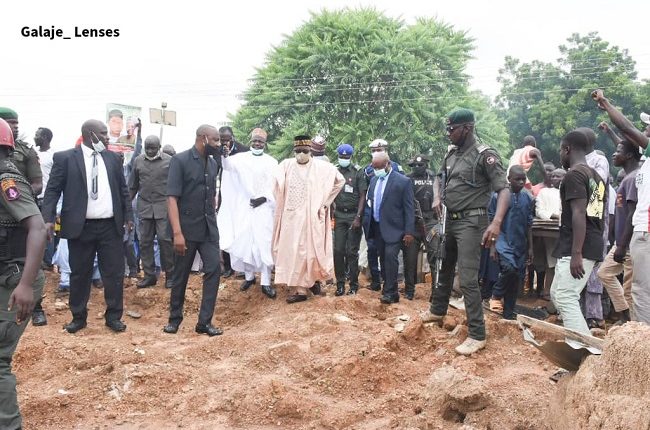 A devastating flood that ravaged some villages in Warji LGA of Bauchi State has claimed no fewer than five lives while houses were pulled down just as farmlands measuring several thousands of hectares were submerged.

Most of the affected victims are now taking refuge in public buildings in the various villages with Katanga Warji, headquarters of the LGA worst hit.

Considering the magnitude of the disaster, Governor Sen Bala Abdulkadir Mohammed, on Thursday visited the LGA to sympathise with victims as well as families who lost their loved ones in the disaster urging them to take it as an act of God.

The governor while sympathising with the people of the area, said that his administration will seek for the support of the Federal Government and other international communities in a bid to find lasting solutions to the environmental challenges facing different parts of the state.

The governor who visited Dagu village, one of the worst-hit villages on an on-the-spot inspection visit said that the state government would provide engineering solutions to tackle further reoccurrences of massive flooding not only in the area but across the state.

Bala Mohammed commiserated with all the affected victims of the flood and assured them of the provision of immediate relief materials to reduce their hardship saying, “We are here to commiserate with the people and families of those who lost their lives over the massive flooding which claimed lives and property worth millions of Naira. ”

The governor added that “I want to appeal to you not to continue staying in this flooding areas, on our part, we will provide engineering solutions to your area to tackle further mass flooding.”

“My administration will continue to work with the Federal Government, private sectors, international communities and other critical stakeholders to find solutions to our environmental problems”, he assured.

The governor, therefore, reaffirmed his administration’s readiness of fulfilling its campaign promises for the benefit of both people of the area and the state, in general, assuring the people of the Local Government that in addition to the ongoing construction of District Head Palace, his administration will provide them with other services.

According to him, Warji is one of the local governments his administration is determined to modernise considering its political growth and development added that more developmental projects are to be executed soon.

Earlier, the State Commissioner for Local Government Affairs, Alh Abdulrazak Nuhu Zaki applauded Governor Bala Mohammed for awarding a contract for the construction of a befitting palace for the District head of Warji which is now at 70 per cent stage of completion.

He said that the flood disaster in the area was so devastating, calling on the government to, as a matter of urgency, come to the aid of the people.

Earlier in a welcome address, the head of administration, Warji local government area commended Governor Bala Mohammed for his timely response to his people who are in dire need of government assistance saying that the situation needs a prompt emergency response.