FeaturesSpecial Report
By Adetola Bademosi and Olamide Eniola On Apr 14, 2019 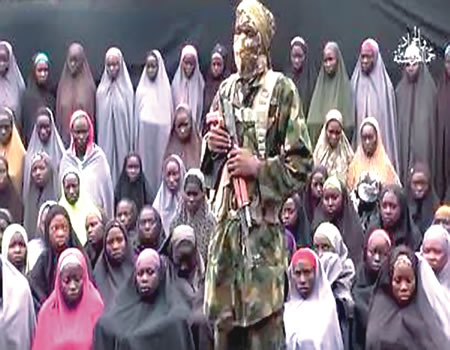 Today marks the fifth year when 276 girls were abducted from the Government Day Secondary School, in Chibok, Borno State. Ever since, parents and relatives of the abducted adolescents have since waited, hoping that their daughters would gain freedom from their abductors and return home. However, this hope has continually suffered defeat as several efforts made by the government to rescue the girls, either through negotiation or other available means, have proved abortive.

In view of government failure four years after, many Nigerians have continued to express their displeasure with the government. The Federal Government under the Buhari administration, in recent months, has come under severe criticisms from civil society organisations, over its failure to effecct the release of the girls. One of the planks upon which Buhari and his party, the All Progressives Congress (APC), won their popularity in 2014/2015 was the assurance that they would secure the release of the girls if they were elected to power.

A notable rescue movement championing the cause of these girls since the dilemma struck, the #BringBackOurGirls (BBOG) movement, has once again condemned the federal government’s silence on the missing 112 Chibok school girls who were abducted by the Boko Haram terrorists on 14th of April, 2014.

It accused the government of shying away from the reality that the girls were still missing, saying this was an injustice to parents of the kidnapped girls.

The movement’s spokesperson, Nifemi Onifade, made the assertion while speaking to Sunday Tribune in Abuja on the five-year commemoration of the missing 112 girls.

According to him, the government has failed in fulfilling its promises of reuniting the girls with their families adding that this had in turn taken its toll on parents of yet to be rescued girls. He disclosed that some of the parent of victims were dead while others are down with various illness.

“Quite frankly you can look at the numbers that have returned and those who have not returned which is an indication of the success of the government. You can only look at the results in terms of what has been achieved in terms of the returns of the girls and so far, we have had about 107 back and 112 in captivity for almost five years on Sunday.

“The government’s efforts are certainly not adequate. If it were, we would not have 112 still in captivity. Nothing is good enough until we have the remaining girls back with us.”

Also assessing government’s effort at rescuing the abducted girls, the 2015 KOWA Party presidential candidate, Professor Remi Sonaiya, could not hide her amazement at how rescuing all the girls has become an uphill task for the government.

During a telephone conversation with Sunday Tribune, the don lamented how insecurity appeared to be a thriving business in Nigeria, despite the huge amount the nation invests on security.

Her words: “I cannot imagine why it has been impossible for our government to rescue these girls in five years. And the reason for one’s amazement is that maybe we are not informed about what efforts are being made and on does not get the feeling that it is a priority issue with this government. What has become of government’s effort at exchanging arrested Boko Haram members for some of the abductors?

“I cannot understand why it is impossible to get all of them released in five years either by negotiation or rescuing or whatever. It is difficult to understand that a country that spends so much on security would find it difficult to rescue their own children from their abductors. Are we saying that the abductors are better equipped and more intelligent than the Nigerian army?

“So it seems as if there is a thriving business of insecurity going on in the country. I seek to know just what is providing security for foreign nationals which is not sufficient for the locals,” she demanded.

Five Years Still Counting: The Chronicle of the Chibok’s Girls in Detention

Since April 14, 2014 when Boko Haram terrorists abducted 276 students of the Government Girls Secondary School, Chibok, Borno State, under questionable circumstances, things have not remained the same. The terrorists who allegedly broke into the school’s dormitory, pretending to be guards, escaped with the school girls who were writing their final year exams in the secondary school. And since then efforts have been to secure the release the girls, some of whom have been reportedly killed or married off by the terrorists.

Although at a point, the Federal Government through extensive negotiations involving international organisations succeeded in securing the freedom of some of the girls, some of them are still being held and have become pawns in high-wired politics and what some terror experts regarded as trans-Atlantic conspiracy.

The Politics: Allegations and Denials

Happening at the twilight of Goodluck Jonathan’s presidency, the abduction became a major campaign point by the opposition All Progressives Congress (APC) against the Peoples Democratic Party (PDP) led government in the build-up to the 2015 general election.

Allies of the former president had maintained that the abductors of the girl perpetrated the act in order to paint the government as incompetent, and that the renowned activist group calling for the rescue of the girls, #Bringbackourgirls, was created to smear the image of the sitting government.

However, according to the APC’s spokesperson then, Alhaji Lai Mohammed, the former President wanted to use the girls’ abduction to gain political sympathy and advantage. Hence, the presidential aspirant for the party, President Muhammad Buhari, reportedly included the rescue of the girls as an agenda for his government.

In the midst of the politicisation of Chibok girls’ abduction, certain Nigerians felt called upon to mount pressure on the Nigerian government to confront the Islamic group and rescue the abducted girls. #Bringbackourgirls movement, created in April, 2014, has been one notable social movement at this. Staging its seminal protest on April 30, 2014, the leader and co-finder of the group, Dr. Oby Ezekwesili, while addressing the parents of the abducted girls, reportedly announced: “We will stand with you until your kids come back.”

Celebrities too have not been left out of the move. Numerous of them joined in on social media holing pieces of paper with the hashtag #BringBackOurGirls and were photographed holding up signs showing the support for the rescue movement.

It was reported that Chibok was targeted for being a Christian community. In a video released by Boko Haram on May 5, 2014, the sect leader, Abubakar Shekau, claimed responsibility for the kidnappings. Shekau, it was reported, claimed: “Allah instructed me to sell them…I will carry out his instructions,” and “Slavery is allowed in my religion, and I shall capture people and make them slaves.”

He said the girls should not have been in school and instead should have been married since girls as young as nine are suitable for marriage. The group which opposes western education was reported to have deployed the girls as cooks and sex slaves. Reports also had it that the non-Muslims among the girls were forcefully converted into Islam, and forced to marry members of the Boko Haram.

Chibok is primarily a Christian village and Shekau acknowledged that many of the girls seized were not Muslims: “The girls that have not accepted Islam, they are now gathered in numbers…and we treat them well the way the Prophet Muhammad treated the infidels he seized.”

The Government’ and Military Intervention

Barely a month after the incident, the Nigerian President, Goodluck Jonathan, spoke publicly about the kidnapping for the first time on May 4, 2014, saying the government was doing everything it could to find the missing girls, having blamed parents for not supplying enough information about their missing children to the police.

The abducted girls could probably have been rescued as of May 24, 2014, had the alleged journalist-brokered deal to secure the release of the girls in exchange for 100 Boko Haram prisoners held in Nigerian jails been honoured by President Goodluck Jonathan. This plan was reportedly ditched at a late stage after President Goodluck Jonathan had consulted with the U.S., Israeli, French and British foreign ministers in Paris, where the consensus was that no deals should be struck with terrorists, and that a solution involving force was required.

On May 26, the Nigerian Chief of Defence Staff announced that the Nigerian security forces had located the kidnapped girls, but ruled out a forceful rescue attempt for fears of collateral damage.

On May 30, it was reported that a civilian militia in the Baale region of Northeastern Nigeria found two of the kidnapped girls raped, ‘half-dead,’ and tied to a tree. Villagers said the Boko Haram group had left the two girls, and killed four other disobedient girls and buried them. 223 were still missing.

Reports had it that the British Royal Air Force (RAF) conducted their search operations in response to the kidnapping. According to a source which was part of the force: “The girls were located in the first few weeks of the RAF mission,” and “We [RAF] offered to rescue them, but the Nigerian government declined.” This was because it viewed the matter as a ‘national issue’ to be resolved by Nigerian intelligence and security services.

What perhaps made the rescue of the girls likely impossible came from the incumbent President Buhari on May 14, 2015, exactly one year after the girls were kidnapped. The president was reported to have said that he could no longer promise that the girls would be found.

In September 2015, Buhari raised the possibility of an exchange of Boko Haram prisoners for the girls. In December, he said he was willing to negotiate with any “credible” Boko Haram leadership and if there was proof the girls were alive.

The Release and Further Detention of Some

In April 2016, on the eve of the abduction’s second anniversary, it emerges that Boko Haram had sent a “proof of life” video to the government. It showed 15 of the girls in black hijabs in the first concrete indication that at least some are still alive.

In May 2016 the Nigerian army confirms the first of the schoolgirls had been found. The 19-year-old was discovered with a four-month-old baby and she described as her husband a man near Boko Haram’s Sambisa Forest enclave.

In October 2016, Nigerian officials announced the first release of 21 of the girls following talks between the government and Boko Haram, brokered by Switzerland and the International Committee of the Red Cross. Local sources said four jihadist prisoners were freed as part of the deal.

The army found two other girls in November 2016 and January 2017. In May 2017, another 82 girls were released in exchange for five Boko Haram commanders as part of the same talks.

In January, 2018, Nigerian military claimed that she had rescued another girl in Pulka Village, Borno. It was estimated that 13 girls were presumed dead with 112 still missing.

While expressing hope that the girls would be rescued, the BBOG’s spokesperson, Nifemi Onifade, urged the federal government to consider negotiation as a tool to securing the release of the girls.