•Says, no arrest yet 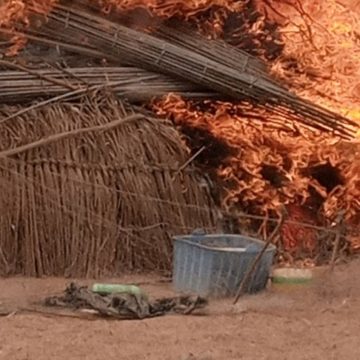 Col. Paul Hemba retd, Security Adviser to Benue State, Governor Samuel Ortom has disclosed that five empty shells were recovered from the scene of the Saturday attack on the State Governor.

The Security Adviser who alongside the Force Commander, Operation Whirl Stroke, Major General Adeyemi Yekini conducted newsmen round the area yesterday said that troops of OPWS responded promptly to the call for reinforcement.

While debunking the report of the arrest of three people in connection with the attack, Hemba said three local fishermen who reside around the Benue river were only invited for questioning after which they were allowed to go home.

He said, “Troops of Operation Whirl Stroke responded to our call and moved in immediately and combed the bushes and found some makeshift hideouts and burnt them.

“We couldn’t make any arrest because the bandits ran away as soon as the troops arrived.

He added, “five empty shells were recovered from this place after the incident.

When asked if anyone had been arrested, Hemba said, “no arrest has been made just that three fishermen staying around the river here were invited for questioning and they were allowed to go.”

The Force Commander, Operation Whirl Stroke, Major General Adeyemi Yekini said that the military has condoned off the area and added that the troops will be there for more days.

Gen. Yekini said, “We are here to show you that the general area is clear of any bandits. The incidence is quite unfortunate and immediately we received a distress call, we moved in and combed the area. We should not be judged by this singular assignment. We have accepted it was a security breach and we will address it.”

General Yekini said that the troops have neutralised over 1000 armed bandits since they began operation in the three states of Benue, Nasarawa and Taraba in the past three years.

He added that close to 700 weapons have been recovered in the three states so far with the highest number of arms recovery, in Benue State.

General Yekini charged the people of the state, especially the Sankera axis of Ukum, Logo and Katsina-Ala to cooperate with security agencies by giving useful information that would help them flush out criminals in the area.

In spite of the huge investment in the water sector by the government and international organisations, water scarcity has grown to become a perennial nightmare for residents of Abeokuta, the Ogun State capital. This report x-rays the lives and experiences of residents in getting clean, potable and affordable water amidst the surge of COVID-19 cases in the state. Five empty shells recovered

Killer of Kogi PDP women leader Salome convicted, sentenced to 12 and a half years imprisonment