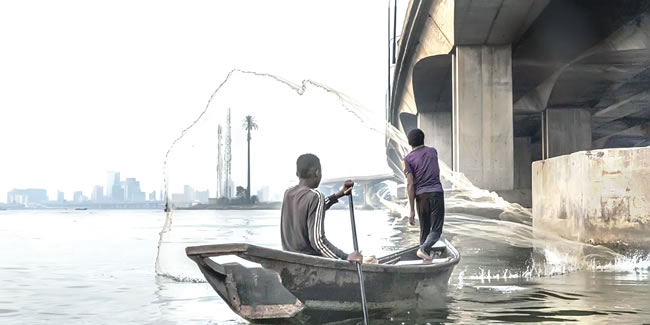 The FishNet Alliance has called on government to recognise fishers as frontline aquatic ecosystem defenders and should be engaged in policy issues. The alliance also called for support for fishers in Ibeno, Akwa Ibom State and in other coastal communities across Nigeria whose livelihoods have been adversely impacted by COVID-19 and other human-induced environmental stressors.

This call was made during a Community Dialogue hosted by Health of Mother Earth Foundation (HOMEF) and attended by members of the FishNet Alliance at Ibeno. The Alliance which is an initiative of HOMEF, also provided fishnets and food items to the Ibeno fishers who earlier this year, suffered a fire outbreak that destroyed their homes and fishing gears.

The COVID-19 pandemic and government restrictions on movement have seriously impacted fishers and farmers in this community who have no formal jobs and who rely on their daily fishing expeditions for sustenance.

Nnimmo Bassey, Director of HOMEF, said in a statement that fishers are essential to both local and international economies, but unfortunately, are among the most vulnerable groups especially in the midst of the COVID-19 pandemic. According to him, the continuous pollution of the Niger Delta by oil and gas related activities is unacceptable and government must heed to the call for the cleanup of the entire polluted Niger Delta communities. He emphasized that government must recognize and restore the dignity and rights of the people of the coastal communities to a decent livelihoods as fishers, fish processors and marketers.

The chairman of the FishNet Alliance in Akwa Ibom State, Rev Sam Ayadi, called on the government to consult and engage fishers in the drafting of policies to protect the aquatic ecosystems. This, according to the chairman, would enable government come up with all-inclusive policies that ensure the safeguarding of their rivers, creeks and seas as well as guarantying their livelihoods as fishers. He also called on the government to hold the companies that are polluting their environment accountable for their acts.

At the end of the dialogue, stakeholders resolved and demanded that: “Fishers should be recognised as frontline aquatic ecosystem defenders and should be engaged in policy issues; and that government should delineate marine protected areas in suitable locations and support fishers to lead efforts to protect such areas.

They said that “fishers are ready to collaborate with government in any effort geared towards mangrove ecosystem restorations as that would enhance fisheries recovery in the region.”

Stakeholders also want government to “put adequate measures in place to help fishers during and after the COVID-19 pandemic,” and “traditional knowledge of fishing practices, including those that help mitigate climate change impacts should be adopted in policies.”

FishNet Alliance is an Africa-wide network of fishers engaged in and promoting sustainable fishing in line with ecosystem limits. The Alliance opposes extractive activities in water bodies – including rivers, lakes and oceans.