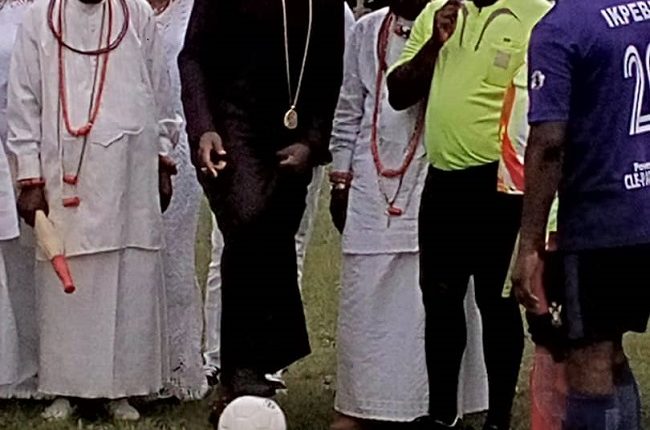 In commemoration of his first year anniversary, the Olu of Warri, His Majesty Ogiame Atuwatse III, on Wednesday, played soccer to the admiration of his subjects with the assistance of his Olori and Super Eagles legend, Victor Ikpeba.

The event, which heralded the five-day programme outlined for the celebration was held at the playing field of Nana College, Warri, Delta State.

It will be recalled that Atuwatse III, the 21st Olu of Warri, ascended the throne of his forebears on Saturday, August 21, 2021.

The monarch and Olori Atuwatse III were the Special Guests of Honour at the two novelty matches specially organised in his honour.

The duo performed the kick-off of both the female and male soccer events respectively.

Players at the male’s novelty match comprised notable ex-Eagles including Victor Ikpeba as well as other known names such as Mark Edema, Dr Segun Adeniran, Omawu Shendorf, Christopher Omoze and Timothy Mobiaku, among others.

The chairman of the media and publicity committee of the anniversary planning group, Prince Yemi Emiko, told journalists that the grand finale of the anniversary scheduled for Saturday at Ode-Itsekiri is expected to feature a cultural display and homage paid to the monarch by various Itsekiri organisations, home and abroad.

According to him, it will be followed by a Thanksgiving Service in the Palace Church, Warri on Sunday.

I set up Umunneochi cattle market to drive revenue ― Kalu