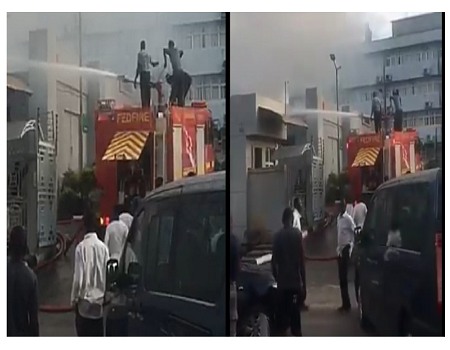 Federal Inland Revenue Service  (FIRS) has confirmed an exclusive report by Nigerian Tribune online of a fire incident at its headquarters on Saturday evening.

According to a statement from Head, Communications and Servicom Department,  Wahab Gbadamosi, the fire occurred at the store of the headquarters annex 1 at around 5:10 PM on Saturday.

The fire affected the store by the FIRS canteen where disused/old computers awaiting disposal are often kept.

He explained that envelopes, printing paper, and stationeries were destroyed in the incident.

“Officials of the Federal Capital Territory (FCT) Fire Service arrived the scene a couple of minutes after the fire began and worked with  Security and Safety officers of the FIRS, to put out the fire within two hours.

“Officials of the FCT Fire Service Department visited the scene again on Monday to ascertain the cause of the fire incident.

“The Fire Service Department is continuing with the investigation to ascertain the cause of the fire incident.”