Property and EnvironmentReal Estate
By Dayo Ayeyemi | Lagos On Feb 16, 2021 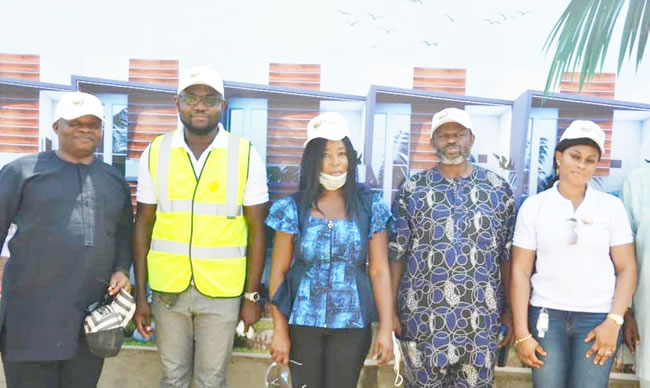 According to the Chief Executive Officer, Cribs and Castles, Mr Ted Ojukwu, the housing estate is part of the firm’s efforts to assist in bridging the accommodation deficit in the country, which is in the tune of 17 million units.

Disclosing this at a ground breaking event held in Lekki, Lagos at recently, Ojukwu said “The volume of housing to the Nigeria’s population is yet to be solved; so we are trying to help in solving the problem. We encourage people to key in and invest.”

Sitting on 2,500 square metres (sqm) land in Ikate, Lekki, the proposed estate is made up of four-bedroom terrace apartments with 24-hour power supply, lightings, water supply and security.

According to the CEO, the new housing estate would encompass 10 units of beautiful terrace houses and boys-quarters, with glittering facilities such as swimming pool and gym.

The most important aspect of the estate, Ojukwu said was the fact that the firm would be constructing tailored buildings, while working with prospective subscribers to make sure they get the best in terms of luxury.

“We will give them weekly update and they will have opportunity to make choices as regard colour and kind of interiors they want. It is not just to build what the person won’t like and then go back again to reconstruct. The quality of buildings and fittings we are going to have in the house from the bricks to everything will be detailed,” he said.

On why the company is commencing the project at this period of the year, he said: “We don’t want coronavirus pandemic to discourage us because we have been in this business for a very long time.

“We have developed other estates with partners like Exclusive Courts and others; so it is the right time because housing is a challenge in Nigeria.”

An elated Ojukwu urged Nigerians to take advantage of high foreign exchange and key into investment in real estate.

He added that he was not only targeting Nigerians in diaspora but everybody for the new housing project.

On estate’s documentation with government, the CEO of Cribs and Castles said he already got plan/building approvals, title and others from the Lagos State Government, adding that buyer or investor has nothing to fear.

According to him, granting of building approval and other documentations was no longer a challenge in Lagos State, except for developers that want to cut corners.

Lauding the authority, he explained that the Lagos State Government has put in place a seamless process for obtaining building approval and other documentations.

He revealed future plan to invest in low-income housing, saying the firm has projects in other locations.

Ojukwu also blamed high housing›s cost in the country on lack of affordable funds, urging government to partner with the private sector to reduce cost of housing units in the country.

Chairman of the occasion, Price Gbenga Lufadeju, said he has seen the project completed already for mutually beneficial relationship.

The Project Director, Okey Okoro, hinted that three clear project teams have been set up for smooth takeoff. These, he said comprised the engineering services, architectural services and project management services.

According to him, after eight months, the project would have witnessed a major turnaround, adding that its highpoints included ease of doing construction project, seamless processes to turn investors to owners and peace of mind.