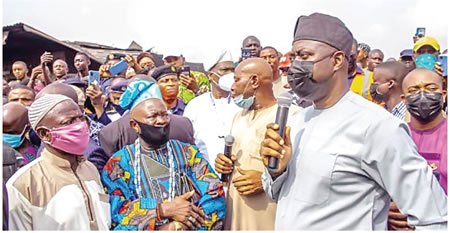 Barring any last-minute challenge, relief is set to come the way of over 20,000 traders whose auto spare part goods and shops were lost in Saturday’s fire incident at the Araromi auto spare part market, Agodi.

This is following the decision of the Oyo State government led by Governor Seyi Makinde to see to the rebuilding and reorganisation of the 51-year old market.

Saturday Tribune reports that about 1,222 shops were razed in the fire which started from the tyre section of the market in Friday night.

An electricity cable was said to have broken and landed on a shop housing brand new tyres very close to another shop in the metal section where metal-cutting gases such as acetylene and propane gases were kept.

Following an initial assessment report by the Oyo State Emergency Management Agency (OYSEMA), Governor Makinde visited the market on an on-the-spot assessment on Sunday. He met with market leaders and charged them to prepare a list of demands that the government can meet in order to assuage the losses incurred by the traders as a result of the fire.

It would also be recalled that the state fire service also said its men were unable to gain access to the seat of the fire following the complete and partial blockage of the four entry points into the market.

But when the leadership of the market met Makinde at the State Government Secretariat on Monday afternoon, it was agreed by all parties that the market will be rebuilt and reorganised in the shortest possible time.

The babaloja of the market, Alhaji Waheed Azeez, who led other leaders to the meeting which lasted more than an hour asked the government for assistance that will help the traders back on their feet.

Speaking with Saturday Tribune on the outcome of the meeting, Alhaji Azeez said the governor agreed with the leaders not to relocate the market, a decision which douses tension and questions on the relocation of the market owing to its lack of organisation.

He added further that the governor promised to assist them to rebuild the market after clearing it of debris and dirt.

“I told him we needed to clear the market before we can rebuild and then he can extend his hands of support to us. And he promised to do that. He challenged us to ensure that all existing roads into the market are made free for easy movement. That we will do,” Azeez assured.

While saying there is no concrete timeline for the rebuilding of the market yet, he added that “our people are already clearing the rubbles individually. The governor will bring caterpillar to remove the rubbles and use it to fill the sections of the roads that enter the market.”

On monetary respite, babaloja said the governor “promised to give us financial support to keep our means of livelihood afloat and within 41 days, this market should be cleared of the rubbles.”

Alhaji Azeez, Saturday Tribune reports, has joined the growing number of traders who are being hospitalised following the fire. It would be recalled that OYSEMA, in its initial assessment report, claimed “some death cases were reported as a result of shocks by some traders.”

Azeez told Saturday Tribune that: “This fire incident has really affected me. I am presently on the hospital bed because my blood pressure is on the high side. My two shops were razed down to nothing. I sell spare parts there.

“All the shops that sell tyres and engines got burnt to ashes. There is nothing that we can depend on right now. And it was the shock of this incident that landed me at the hospital.” 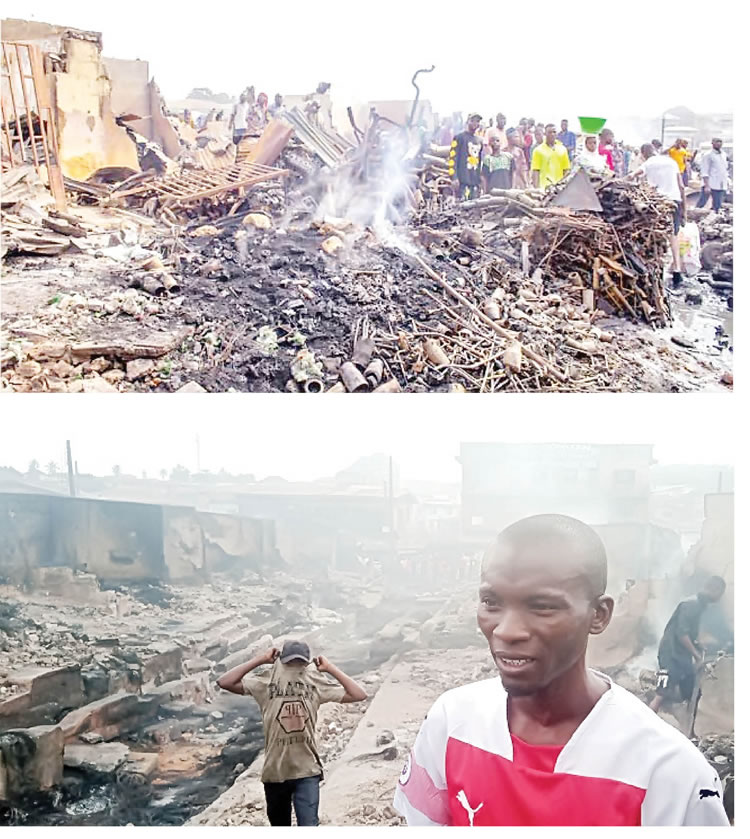 He appealed to good-spirited citizens to join in the drive to alleviate their sufferings, adding that “it is too much for us to bear. We can’t even estimate the total loss recorded here.

“About 1,222 shops were razed in the fire. How much can one estimate for the rebuilding of that kind of shops, for that large number of people? We can only do the best we can individually and collectively.”

Despite the promise for a reprieve by the government, some traders are still relieving the horrible experience of the fire outbreak.

Saturday Tribune also learnt that the markets leaders have continued to keep vigil in order to forestall the actions of angry youths who want to raze the entire market, particularly shops not affected by Saturday’s fire.

The market leaders also engaged the services of the men of the Western Security Network codenamed Amotekun and the Nigeria Police.

In spite of the fact that commercial activities at the market have dwindled astronomically save for those selling small-sized iron materials, human traffic has continued to increase.

Speaking on the decision of the government not to relocate the market, one of the traders who has spent twenty-seven years at the market, Oluwagbemiga Awomide, said it was best to allow the market to retain its present location because it takes a lot more than the building of shops to make a market popular.

He recalled that his late seniors who trained him toiled to take the market to this enviable height after it was relocated from Ogunpa in 1970.

“Before the fire incident, we are living on our customers who we provide extra services for. People hardly come here like it used to be. What will now happen when you relocate to another bush?” Awomide queried.

“This place was a bush and they built these shops themselves. It wasn’t the government that built this place for them.

“I think they moved here from Ogunpa in order to expand, particularly after realizing that the Ogunpa site could not accommodate them all,” Awomide who lost tyres worth N4 million to the fire added.

Another trader in the metal section, Muskilu Adetunji appealed to the government and well-wishers to assist them with the rebuilding of the market.

Adetunji’s fear right now remains how to cater for his immediate family of six and relatives who depend on him for their subsistence.

“If the government can allow us to freely rebuild in the shortest possible time, we will appreciate because we understand that the land belongs to the government.

“There is nothing to fall on. There are many people whose care depend on what I make here. Many others like me in this market are breadwinners. How do we survive?” he queried.

Another trader whose shop was razed, Mustapha Muhideen said mechanics in the town are also reeling from the loss incurred in the fire.

“I am just coming from a mechanic’s shop where I have gone to repair my car. They are already lamenting that they don’t know where else to get spare parts for the vehicles brought for repairs. They depend on us and now everyone is stranded on what next to do. We are not the only ones who will bear the brunt of these losses.

Analysis: Nigeria’s energy challenge is beyond one big refinery