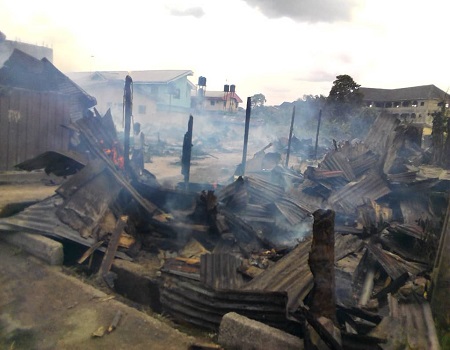 Over 1,000 shops and goods worth hundreds of millions of naira were razed by fire in the early hours of Monday at Otukpo Main Market area of Benue State.

According to an eyewitness who identified himself as Ankeli Amanyi, he said that the inferno  started around 5am and  destroyed over 1,000 shops

Amanyi who decried the frequent fire outbreak at Otukpo Main Market said that Monday’s incident made it the seventh time fire was ravaging the market in the past 20 years.

According to Amanyi, “The fire was noticed around 5.00 am this morning (Monday) and it destroyed over 1,000 shops. No one could say for certain what caused the fire; we just noticed thick smoke from the market which drew the attention of people to the area.

“Actually, the firefighters responded promptly but there was little they could do to put out the fire. The nature of the market did not pave the way for the vehicle to enter the market

“This incident makes it the seventh time the market is burning in the last 20 years. It always happens every two to three years.”

The director, fire service in Benue State, Ikyaaza Donald, who confirmed the fire incident said that his men responded promptly.