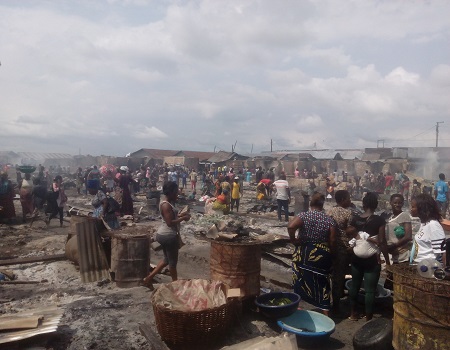 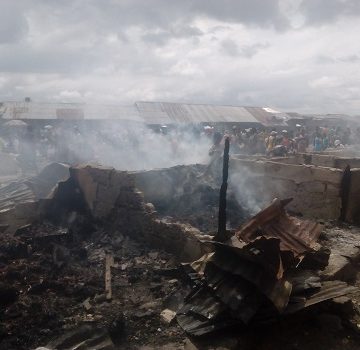 AGAIN, no fewer than 500 fish stores were late Tuesday night, destroyed by an inferno at Ogbe-Ijoh market in Warri South Local Government Area of Delta State.

This is coming barely a year after another fire drew hot tears from the eyes of traders who daily hustle to eke a living amid a blighted economy.

Wailing owners of the fish stores built with planks said the inferno destroyed goods worth millions of naira while hoodlums feasted on others.

They equally accused the market vigilance team whom they contribute N500 each to monthly of compromise ahead of the Yuletide, while some of the traders said the fire started from an electric surge.

But hoodlums defied the raging fire to swoop on the stores to loot, a development that later attracted the presence of soldiers to the area.

A visit to the area by Nigerian Tribune revealed that worst hit was smoked fish sellers section that could hardly salvage their wares from the raging fire.

There’s hardly any twilight of the year in recent times that a fire outbreak has not been recorded at Ogbe-Ijoh market, yet the state government hardly sees the need to evacuate the traders and replace the shanties with a modern market

The inferno ritual usually hovers between December and January annually that often leaves the traders shattered and distraught while hoodlums smile home.

Tuesday inferno lasted for about three hours but would have been more devastating if not for the swift intervention of firefighters from the Delta State Fire Service.

Amid wailing from the traders who had come Wednesday morning to clear the remains of their once-booming petty trade, the commissioner representing the Ijaw ethnic nationality on the board of DESOPADEC, Chief Favour Izoukumor, could not help but console them.

He mumbled the usual rhetorics of the state being plagued by recession and the endless promise that the state would do the needful.

“My concern is that there should be unity first to maintain peace in this market.

“Sometimes there are lots of fracases from this market; maybe when there is unity this fire inferno will be avoided.

“The country is facing recession from the federal to the state level; we are about to overcome all of these challenges and I believe the governor would see how permanent structure is put in place,” he concluded.

“Na fish we dey sell here, because of no proper care, and temporary structure so the time people dey dry fish, or if NEPA light comes, e dey causes fire,” she lamented.

According to her, the market needs through boreholes and better structure, calling on DESOPADEC and the state government to assist the women who suffered the losses with relief materials.

Nigerian Tribune reports that since 2010, no year passes by without a fire outbreak in that section of the market which usually throws the traders into deep losses.

However, the market also plays host to buyers of illegally refined fuels such as diesel, petrol, and kerosene we which often ignited the fire when carrying out product test by buyers.

Mrs Florence Akpudi and Comfort Eboh, who suffered great losses in the inferno, lamented that in spite of the N500 they contribute for the security of the market, it has always been tragedies year in, year out.

“We dey pay for security for this market each store 500 naira a month.

“Where the security dey when the fire start? Make them go ask them to talk.

“Every time they go collect money from our hand for different matter, now my store burns finish, nothing to rescue for me.

“Since 2010, this place dey burn, make them come help us for this market, because we dey pay everything them dey ask for,” Mrs Akpudi pleaded.

No sacrifice is too big to attain peace ―Jonathan