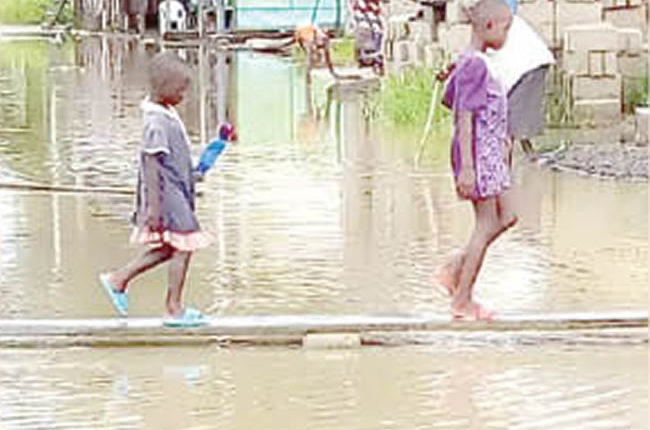 As floods continue to ravage many communities in Delta State with children dying in the process, a community leader, Mr EnaiboAsiayei has called on the federal and state governments to intervene urgently.

Mr Asiayei, who is also the General Manager of GbaramatuVoiceMedia House, made this known at a press conference held recently in Warri.

The general manager cited his community,Bobougbene in Burutu Local Government Area of Delta State as an urgent case where the floods had submerged various houses and destroyed properties and even crops. This, according to him, is a threat to livelihood and lives of the indigenes as a whole.

He further said that over the years as far back as 2012, the floods have grown to be a monstrous challenge faced by his community as this year’s flood even claimed the life of a child who fell from the wooden bed he was sleeping on into the flood water and then drowned.

Mr Enaibosaid he and community members were pained to the core, therefore he had to speak up for his community and others suffering this plight of flooding.

He also said that due to the floods, reptiles such as snakes and crocodiles would invade the community which needless to say, poses a direct threat to human lives.

He therefore called on the Federal Government and state government, particularly the Governor of Delta State, Dr IfeanyiOkowa who he described as a proactive governor who listens to his people to please come to the rescue of these affected communities by looking into the matter and providing possible solutions for the flooding concern.

In the same vein,Bobougbene community chairman, Mr Matthew Agbada expressed his bemusement at the nonchalance of the government towards the raging floods in his community and other communities. He said this had gone on for too long and so he expected that by now, the government would have intervened.

He therefore called on both the Federal Government and the state government to do the needful and address the plights of their citizens as these communities face the danger of extinction.