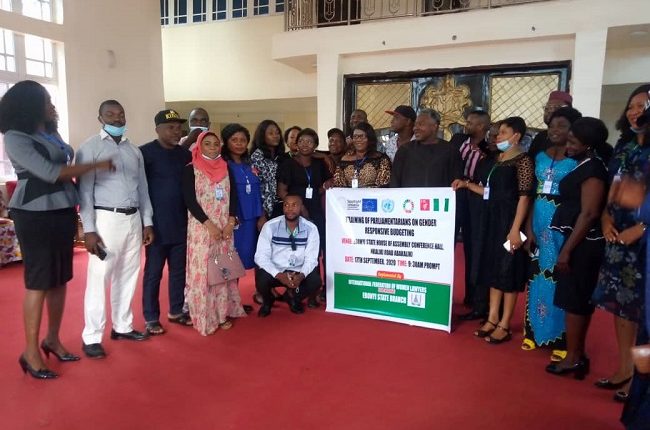 The International Federation of Women Lawyers (FIDA) has charged the members of Ebonyi State House of Assembly to join in the fight to eradicate all forms of gender-based violence in the state.

FIDA made the call while participating at a one-day training of parliamentarians on gender-responsive budgeting organised by FIDA Nigeria, Ebonyi State branch with support from EU-UN Spotlight Initiative at the state House of Assembly Conference Hall, Nkaliki road Abakaliki.

According to the chairperson FIDA, Barr. Grace Chima, the parliamentarians have more than 80 per cent role in fighting gender-based violence, appealing to them to implement the law and also make copies of the VAPP law available for easy access.

She stated that its availability remains one of the measures to curb the increase of gender-based violence in Nigeria including rape and domestic violence.

She then lauded the EU-UN Spotlights initiative for partnering with Ebonyi state to eradicate gender-based violence.

House leader, Hon. Chukwu Victor Uzoma said the state’s legislature has lived to expectations by bringing into existence of the VAPP law.

He appealed to relevant stakeholders in charge to up their game to ensure that the law is enforced to avoid a further collapse of moral standing.

According to him, the law, when enforced, will eradicate violence against humanity.

While commending EU-UN Spotlight Initiative for the training, Hon. Nkemka Onuma said there is a need to pay more attention on gender matters in the state budget so as to secure the future of women, girls and children.

Other lawmakers including Hon. Chukwuma Igwe, Hon. Chinwe Nwachukwu, Hon Oliver Osai, and Hon. Franca Okpo urged the police, judiciary and other relevant authorities to take the fight against gender violence serious as the law has been passed and assented to by the executive.

On his part, the facilitator, Mr.Chijioke Okegbue gave a comprehensive analysis of the current state budget on gender-based violence (GBV) as reviewed in July. He noted that Ebonyi State is taking the lead in violence against women and girls in the South East.

He then urged the government to make provision in the budget that will reduce GBV in the state to the barest minimum.

Meanwhile, representative of the civil society organizations, Barr. Nkem Chukwu, earlier appealed to the lawmakers to make provision in the law for a mobile court in each of the three senatorial zones that will focus on addressing issues of gender-based only in the state.

She also appealed for the maintenance, equipping and staffing of all health centres in the state including the provision of staff quarters in the health centres.

Other CSO representatives who spoke including Oliver Chima, Goodness Mgbaje and Charity Odio appealed that the law be amended to accommodate the creation of skills acquisition centres, free health care services, shelter homes and free transportation for the vulnerable.

Secretary of FIDA, Barr. Chinelo Okeke, however, noted that there is need for the lawmakers to accommodate sexual assault referral centres (SARC) in the state law so as to provide all necessary assistance to survivors of GBV.