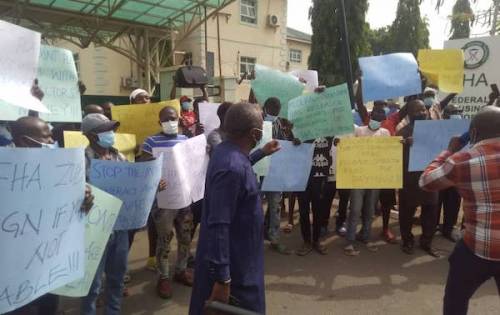 Over 200 contractors who handled the construction of Abuja Mass Housing Project for the Federal Housing Authority (FHA) on Tuesday protested the non-payment of N1.5 billion debt owed them.

The contractors under the aegis of the Federal Housing Authority Contractors Association said the housing authority had delayed payments despite completing the project.

The protesters gathered at the FHA office at 26 Julius Nyerere Crescent, Asokoro, Abuja where the placard-wielding crowd chanted solidarity songs, calling for the release of their files which they said have been with the management.

They specifically stated that they have not been paid for the Abuja Mass Housing Project in Zuba totalling N1.5 billion as well as the Apo housing project awarded in 2011 and completed since February 2020.

In addition, the contractors complained of illegal deduction of 7.5% Value Added Tax as against 5% Value Added Tax that was clearly stated in its BOQ and the letter of award of 2011 for Apo and 2018 of Zuba Mass Housing Project.

Chairman of the Association, Mr Innocent Idika, who addressed journalists said some of the contracts were executed and handed over in 2011 without payment.

Odika further explained the reasons for the protest: “The total completion payment for Abuja Mass Housing Project, Zuba was released last year by the Federal Government in the total sum of N1.5billion but the money has been with the management.

“Many contractors that had payment certificate since last year December have not been paid, their files had been stocked at the office of Executive Director Business Development (EDBD) since December 2020.”

He said several appeals and meetings held with management to resolve the aforementioned were to no avail.

Meanwhile, in its reaction, the FHA assured that contractors who have completed their jobs would receive their payments latest by Friday, March 19, 2021.

It said the delay in payment was as a result of management’s stance on due diligence before payments are made.

“Management did not deliberately withhold the payment of our contractors, with whom the authority has a long-standing good business relationship.

“The little delay in payment was as a result of Management’s stance on due diligence before payments are made.

“It is good to note that this issue has been amicably resolved,” a statement issued by FHA’s PRO Kenneth Chigelu reads.