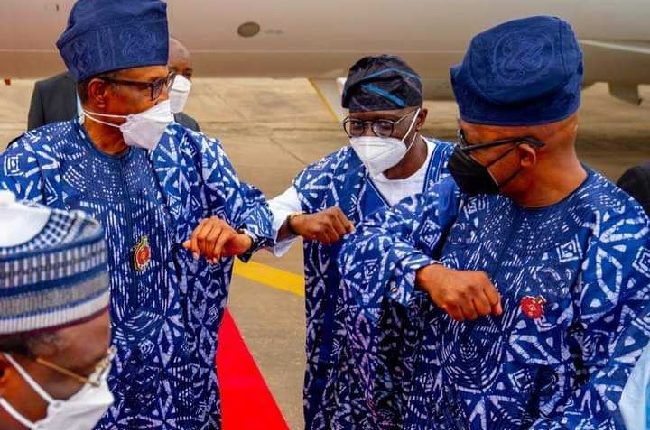 President Muhammadu Buhari, on Thursday, said that the Federal Government would consider approval for the reconstruction of Sagamu-Ogijo-Ikorodu and Sango-Ota-Idiroko highways.

He gave the assurance while on a one-day state visit to Ogun, the Gateway State, that two other Federal Government roads, that is, the Sagamu-Benin Expressway and the Lagos-Ibadan Expressway would be commissioned before the end of this year.

Buhari in his address at a reception held at the Gateway City Monument Park, located at Sagamu Interchange, commended Abiodun for delivering visionary and trail-blazing projects for the people, despite the challenges occasioned by the COVID-19 pandemic.

The President hinted that the Federal Government has considered tax credit as funding option for the reconstruction of the 100km Sagamu Interchange-Papalanto-Ilaro Road Dangote Group.

While stressing that FG would consider the approval of the reconstruction of Sagamu-Ogijo Road by the Nigerian National Petroleum Company (NNPC) Limited under the tax credit scheme.

The President noted that the lofty projects: the Gateway City Gate; the 42-Kilometre Sagamu Interchange-Abeokuta Road; the 14km Ijebu-Ode-Epe Expressway and two Housing Estates for low, medium and high-income earners at Kobape and Oke-Mosan in Abeokuta, respectively, could not have materialised without the State government’s huge investment and commitment to the security of lives and property.

He described Abiodun as a ‘‘performing Governor of Nigeria’s Gateway State,’’ saying he is a worthy example of ‘‘promises made, promises kept.

‘‘This has made Ogun State one of the safest and most peaceful States in the country and investors’ destination of choice.

‘‘You (Prince Abiodun) have justified the mandate of the people of Ogun State. You have represented our Party very well,’’ the President said.

Buhari expressed satisfaction over the construction of 14km Ijebu Ode-Mojoda-Epe road, said to have been reconstructed into a modern expressway by the State government.

The President noted that the road would complement the ongoing reconstruction on the Sagamu-Benin Expressway.

He said ‘‘Just across the road is the 42-kilometre Sagamu-Interchange-Abeokuta road which the state Government has reconstructed and equipped with street lights.

‘‘That road enjoys a direct linkage with the Lagos-Ibadan Expressway that the Federal Government is rebuilding and due for completion later this year.

‘‘I am particularly impressed by the quality and standard of your road projects, and the creative way you have deployed resources to reconstruct and rehabilitate them.

‘‘It is significant to note that the two road projects being commissioned today are federal roads. This is an example of constructive engagement, cooperation and collaboration between the States and Federal Government.

‘‘These roads also fit well into our rail transportation masterplan that connects Lagos, Nigeria’s economic capital to Kano, with Ogun State having more rail stations, along the Lagos-Ibadan rail corridor.’’

Speaking on the housing programme of the state government, the President commended its inclusiveness, saying it is equally heart-warming that it cuts across different social strata, capturing the low, medium and high-income earners.

While admiring the Gateway City Gate Project, Buhari said ‘‘it is not just a park beautification project. It depicts that something new is happening in Ogun State, a welcoming entrance into the State Capital at the centre point of the State.’’

He added that the project is also an icon depicting the joining of hands for building the future of Ogun State in togetherness.

‘‘Your Excellency, well done! I am proud of what you have done for your State and your people.

‘‘You have made our great Party, the APC, proud too. You are a worthy example of promises made, promises kept. These lofty projects could not have materialised without your huge investment and commitment to the security of lives and property.’’

Responding to requests by the state governor to give priority to the Lagos-Ota-Abeokuta and the Sango Otta-Idiroko Roads respectively, the President assured the people of Ogun State that these roads will receive Federal Government attention.

The President announced that the Federal Government would consider extending tax credit as funding option for the reconstruction of these roads, as done for the 100km Sagamu Interchange-Papalanto-Ilaro Road.

Similarly, the President promised to consider the approval of the reconstruction of Sagamu-Ogijo Road by the Nigerian National Petroleum Company (NNPC) Limited under the tax credit scheme.

The President thanked the residents of the State for the warm reception accorded him and his entourage in the Gateway State, which is his first visit to any State in the New Year.

‘‘This welcome by the large crowd brings back the nostalgia of my first arrival on this soil as a young infantry officer in the Nigerian Army at the then Lafenwa Barracks in Abeokuta, not long after independence.

‘‘The traditional hospitality of the people of this State has not waned a bit. Today, I am “Omowale” and very happy at this homecoming to meet my brothers and sisters whose goodwill I have always enjoyed. Thank you.’’

The President also congratulated the people of Ogun State for having such a focused, deliberate and inclusive Administration under the watch of Prince Abiodun, urging them to continue to support the governor for the successful implementation of the “Building our Future Together” Agenda of his Administration.

‘‘The reward for success is more hardwork to meet the increasing expectations of the people.

‘‘When state governments deliver impactful projects, in consultations with stakeholders, like we have witnessed in Ogun State, the trajectory of our national development will be enhanced.’’

The President, who was bestowed with ‘‘honourary indigeneship’’ of the State, said:

‘‘It is also with a sense of responsibility that I receive and cherish the honourary indigeneship bestowed on me as symbolized by the presentation of the key to the Gateway State by Governor Abiodun.

‘‘I will leave Ogun State with fond memories and look forward to enjoying the privilege of my honourary indigeneship.’’

Abiodun in his address said all projects and programmes embarked on by his administration are deliberate and guided by its vision to give Ogun State focused and qualitative governance.

He explained that the choice of the five projects commissioned by Buhari are some out of the many landmark projects by his government.

Abiodun said, “These are just a few of our achievements. We have so much more to showcase. These selected few that Your Excellency will commission are however symbolic of the various types of projects across all sectors of our dear State’s economy. And, they are spread all through the three senatorial districts. Mr President, I have the honour to report that our administration in Ogun State has continued to fulfil all its promises to the people within the available means.”

“This road not only leads to one of the largest depots of NNPC at Mosinmi, Sagamu, it is also an alternative road to the ever-busy Lagos-Ibadan expressway. We also look forward to the Federal Government’s approval of similar creative funding arrangements for the Otta-Idiroko Road and other federal roads traversing our dear State.

“We passionately appeal to Your Excellency to graciously direct relevant federal government agencies to expedite action towards prompt rehabilitation and completion of these roads. This will improve the welfare and wellbeing of our people.”

Verdict: The claim is false. The content of the article published by these online platforms is not new; it has been recirculated several times and has been debunked.FG will consider approval of tax credit scheme for reconstruction of Sagamu-Ogijo-Ikorodu, Sango-Idiroko highways – Buhari