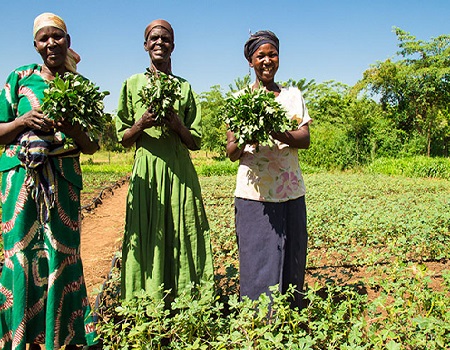 The Federal Ministry of Agriculture and Rural Development (FMARD), says it wants food grown in an environment free from artificial agrichemicals spread across the northeast and west of the country.

He said organic agriculture was bigger as a business as millions are waiting in the open market to harness its benefits, financially and health-wise.

Speaking through Mrs Igoh Janet, also an Assistant Director in the same organic division of FMARD, Adamu said “a lot of vegetables and produce take place in the north.’’

He added that the north had a culture of fertility, as most staple crops eaten in Nigeria are grown in the north.

“We want Ecological Organic Agriculture (EOA) to find itself in Borno, Sokoto, Kebbi, Kano, Jigawa, Katsina, Kaduna and all states in northern Nigeria like what is obtainable in the south,’’ he said.

He said FMARD was not discriminatory of any farming techniques or practices as long as it met FMARD’s standard, and therefore it demanded recommendations after the meeting on the next line of action.

Professor Victor Olowe, of the Federal University of Agriculture, Abeokuta and the president of Association of Organic Agriculture Practitioners of Nigeria, said as a production system, organic agriculture commands up to $100 billion globally.

Olowe said that unfortunately, Africa as a whole was not contributing more than three per cent of the $100 billion, hence Nigeria needed to key into the global trade.

According to him, Nigeria has the potential and practitioners as well, and that what was actually driving the initiative was health concerns.

“People are now being conscious of what they consume, what they eat, and it is better to invest in quality food than to invest in treating diseases that are food-related.

“If practitioners and producers in Nigeria will key into this, they stand to make more money from their products and sales,’’ he said.

He said organic agriculture which was not new to Nigerians, is a production system that does not involve the use of agrochemicals, and that it depended largely on internal farm inputs.

“All plants growing around are botanicals, which could be processed and used to control most of these pests; there is no need to use synthetic fertilizers, herbicides or pesticides to control pests, kill weeds.

“As such, foods and produce coming from such a system is very wholesome for the body,’’ Olowe said.

He disclosed all that was required was to formalise organic agriculture in Nigeria and follow the standards. In order to reap the dividends,

The produce of organic agriculture, he said attracted premium price which is about 20 to 30 per cent above the conventional produce, and that but people that will pay the premium price.

He said the association participated in a project called Ecological Organic Agriculture in Africa which was driven by the African Union Commission and Nigeria is one of the participating countries.

Mr Olugbenga AdeOluwa, Country Coordinator of the EOA in Nigeria said organic farming was becoming more popular all over the world with a high demand for organic produce like ginger rising every year.

“People are getting conscious of their health with organic products constituting daily to human and community health, therefore it was time for Africa to consider organic farming as an important aspect of agriculture.

“In North Africa, people are tapping into it and Togo has declared they want to be the first organic country in Africa,’’ AdeOluwa said.

He also spoke about the certification of organic produce, adding that without a strong certification, “organic agriculture can be completely muddled.’’

He said Nigeria should be the point of organic agriculture in West Africa and that people are looking for those able to supply organic fertilizer in order to grow and eat wholesome food.

He said though organic agriculture lacked funding, it will entice youths because it was knowledge-based, and will create millions for Nigeria’s teeming population and ensure GDP growth.

Abdulrazaq Baba, a participant from Federation of Agricultural Commodity Associations of Nigeria (FACAN), said Nigerians and farmers had to be sensitised on how to switch to organic agriculture.

“It is very important because we cannot vouch for what we consume in this country which could be a possible threat to our lives,’’ he said.

Mr Jethro Terkura, another participant from C and C Burford Consulting Ltd, an organic produce distributor company, Nigeria must go back to the rudiments of doing the right thing and the right practices.

This is to ensure that whatever a Nigerian gets as agricultural produce commodity in the market is safe for consumption and at the same time good for export.