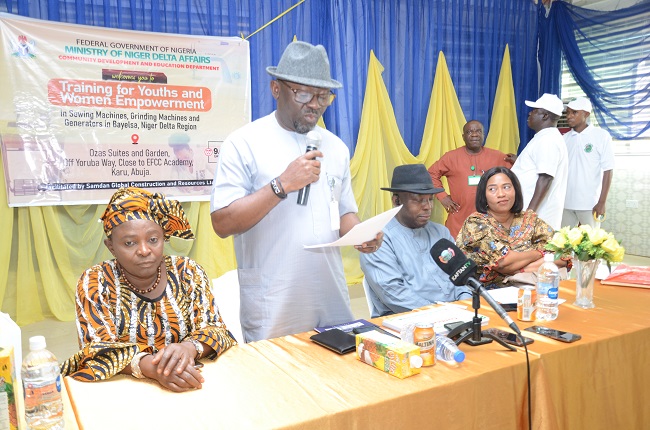 The Federal Government has urged youths and women from the Niger Delta region to stimulate the development of Micro, Small and Medium Enterprises (MSMEs) in their communities to promote self-reliance and curb insecurity in the region.

The Permanent Secretary explained that the training initiative is one of the considerations by the federal government aimed at diversifying the economy, re-orienting values and generating employment for youths and women in the Niger Delta region.

The training and empowerment initiative put together by the ministry is expected to among others:” Enable the beneficiaries to be able to manage a business for effective enterprise development.

“Ensure self-reliance and ability to engage others, generate income within and outside the family, impact theoretical and practical knowledge and also provide practical skill in ICT to facilitate interaction with the world and prepare participants for the task ahead”, he said.

According to the Permanent Secretary, “the ministry is also aware that training without support of the terminal point would amount to an effort in futility”. Therefore, as part of the programme, an empowerment package has been put together by way of start-up capital for the trainees to commence a micro-enterprise on what they have been exposed to and make sure it is judiciously used to accomplish the ultimate goal of this programme.

Earlier in his remarks, the Director of, the Economic Empowerment Department, MNDA, Mr Philip Ndioumu stated that this particular session is one of the activities carried out by the department to not only empower youths across the region but to also remould their character through value re-orientation programme.

“Very soon before the year ends, other youths who were not captured at this time would be captured in the near future. We are looking at providing training for about 1,110 other beneficiaries drawn from the over 4,000 people registered across the region in our database. Also, those who have been agitating to be considered will be included in the programme”, he explained.

Representative of the participants and one of the beneficiaries of the training initiative, Mr Precious Okere expressed appreciation to the federal government, noting that the empowerment programme will go a long way in addressing unemployment and insecurity in the Niger Delta region. “I strongly believe that the programme as a continuous exercise would keep most youths engaged, he noted.