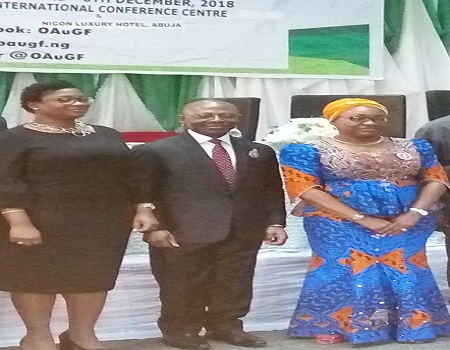 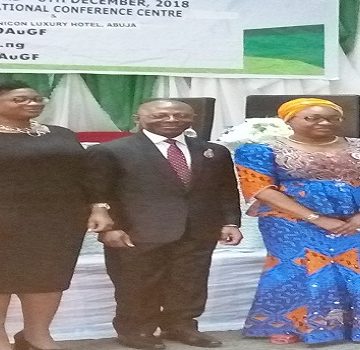 PRESIDENT Muhammadu Buhari has urged all Auditors-General to support the Federal Government’s fight against corruption in the country.

Buhari, represented by Mrs Winifred Oyo-Ita, Head of Civil Service of the Federation, said this at the 2018 Conference of Auditors-General in Nigeria on Tuesday, in Abuja.

He said that tremendous achievements had been recorded in all three areas of security, corruption and revamping of the economy, which were the focus of his administration.

He said that the desired level in the fight against corruption was yet to be attained.

He challenged Auditors-General, to enthrone transparency and accountability in the public sector to deepen the fight against corruption.

“In other jurisdiction, audit institutions, constantly produce reports on progress, across various facets of the public enterprise as a matter of routine.

“I, therefore, urge you to take this role very seriously; as it has a direct impact on our development as a nation and what we make from our limited resources.

“I want to emphatically state that your constitutional duty and responsibility to stop corruption even before it happens is very unique, especially with the independence that it guarantees

“At the end of this conference, you are expected to come up with recommendations that will help you perform these roles more efficiently.

“And the government will continue to provide the required support in recognition of the critical roles auditors’ play in governance,” he said.

According to Buhari, the government has introduced several measures to achieve certain minimum improvement in governance and public financial management.

These he said include State Fiscal Transparency, Accountability and Sustainability Programme (SFTAS), in which 700 million dollars would be made available as grants to states.

He said a similar sum of 50 million dollars in technical assistance would be made available to key agencies within the states to build capacity.

This he said would encourage the auditors to key into the opportunities.

He restated the importance of auditors as constitutional watchdogs, saying they ought to be vigilant, independent, above politics and must report their findings without fear or compromise.

“As custodians of good governance, unless you perform well in your roles whatever is achieved in government may not be sustained.

“I emphasise this to leave you in no doubt about the significance of your role in the struggle for better governance, fight against corruption, hope for a better future for all Nigerians,’’ he added.

Mr Kingsley Chinda, Chairman, House Committee on Public Accounts, who represented the Speaker, House of Representatives, urged the auditors to come up with a roadmap that would guide the National Assembly on achieving the SDGs.

He said that without auditors, we will be far from achieving the SDGs.

He said that they were expected you to come up with a clear roadmap in achieving these SDGs.

In his address, Mr Anthony Ayine, the Auditor-General of the Federation, called for the enactment of an Audit Act to help in the drive of the SDGs.

According to Ayine, the SDGs is the United Nations blueprint for a better future for all and is aimed at addressing global challenges such as poverty, inequality, and climate change among others.

He said that for Nigeria to succeed in the implementation, all hands must be on deck with the participation of government at all levels.

Ayine expressed optimism that the auditors at the end of the conference would come up with standardised formats of our national reporting on SDGs implementation performance.

“Will address issues of capacity building to position the Supreme Audit Institutions (SAIs) to report on SDGs and agree on modalities for conducting co-operative audits where necessary among the SAIs,’’ he said.

In her remarks, the Auditor-General of Sierra- Leone, Mrs Lara Tailor-Pearce urged the auditors to ensure a better understanding of what was expected of them as auditors.

Tailor-Pearce who is also the Chairperson, African Region of Supreme Audit Institution, English Speaking, said: “ we should make sure that by 2023, we will achieve the SDGs for the betterment of all.’’