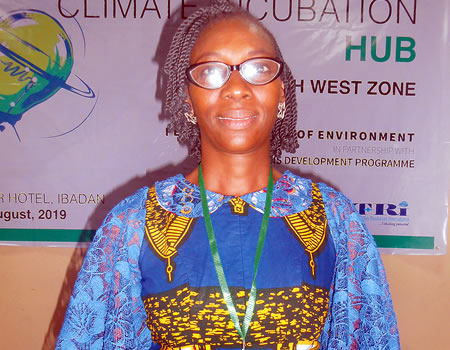 THE Federal Government, through the Federal Ministry of Environment, in collaboration with the United Nations Development Programme (UNDP) and               Talentplus Resources International (TRI), recently brought together youths across the different geo-political zones in the country to deliberate on climate change and suggest ways through which the climatic challenges could be tackled.

In the South-West, participants from the six states of the region gathered at the Premier Hotel, Ibadan, Oyo State, on August 26 and 27 for a two-day summit, where ideas were generated on the way forward.

While declaring the summit open, the Oyo State Commissioner for Environment, Honourable Kehinde Ayoola, described climate change as one of the greatest challenges facing the world today.

Honourable Ayoola, who was represented by Mrs Modupe Adeleye, a director in the ministry, said while everybody is affected by the effects of climate change, “it is important we come together to discuss ways through which we can reduce its impact in our societies.”

While listing rising sea levels, flooding, deforestation, heatwaves, among others as effects of climate change, the commissioner said the Federal Government’s policy on the issue would go a long way in reducing the effect on the people.

“However, we must work towards ensuring a cleaner environment; and this means not dumping refuse in drainages, as well as indiscriminate cutting of trees, among others.

“I am happy that youths are been included in this awareness programme, and it is hoped that the message will be taken to the society. You must discuss about climate change issues among yourselves, especially through social media.

“However, the most important thing here is attitudinal change, and Oyo State is ready to partner with relevant stakeholders in order to mitigate the effect of climate change in our country,” Honourable Ayoola said.

In her lecture, Madam Sa’adatuGamboMadaki of the Department of Climate Change, Federal Ministry of Environment, described climate change as a change of climate, which is attributed directly or indirectly to human activities.

“Human activities alter the composition of the global atmosphere and we are already feeling in impact across the world, including in Nigeria.

“However, there have been different global efforts to address climate change, which Nigeria has been a part of.

“Therefore, the idea behind the youth climate hub is to establish youth regional climate innovation hub that would serve as a platform for continuing interface of young people with government and development partners for implementation of practical climate solutions,” Mrs Madaki said.

In her remarks, the executive director of Talentplus Resources International, Mrs AderonkeKimemenihia-Eseka, said the programme, in collaboration with the Federal Ministry of Environment, targets youths in the South West and North West regions of the country.

“Climate change is a huge challenge on our hands now and we are targeting youths who are the future. We have been seeing the effects of climate change, so we felt if we bring in the youth, they will be aware of the challenges and know what to do.

“Therefore, as government formulates policies on climate change, youths need to be carried along, and that is why we are focusing on youths so that they will understand what climate change is.

“Also, by bringing them together, we will be able to generate new ideas on how to tackle climate change; all viable ideas will be passed to the government through the Ministry of Environment,” Mrs Kimemenihia-Eseka said.

One of the participants from Ekiti State, OlujideOlutayo, commended the Federal Government for carrying youths along in the climate change project.

Olutayo, who admitted that the programme would make youths to be more aware of the challenges confronting our environment, urged the Federal Government to implement ideas generated during the programme.

“I am happy that the Federal Government, through the Federal Ministry of Environment, is seeking the support of youths on this important issue which affects everyone; however, I want all the ideas generated to be implemented. I am happy that the programme is taking place across the geopolitical zones of the country, so there will be plenty of ideas to tap from,” Olutayo said.

Another participant, GbemiAdesile, who travelled from Lagos for the programme, called on the Federal Government to sensitise people on the need to keep the environment clean.

“Environmental pollution starts from people dumping gabbages in drainages, so there is nothing we will achieve if we don’t change the attitude of our people,” Adesile said.

State of emergency in environment: ‘Mauritius has done what Nigeria should have done…