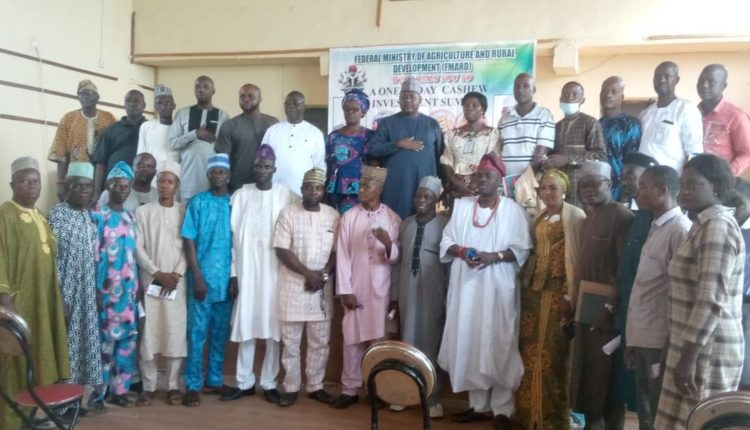 Federal Ministry of Agriculture and Rural Development on Tuesday trained agriculture stakeholders in Kwara State on the cashew value chain.

The Permanent Secretary in the ministry, Dr Ernest Umakhihe, who was represented by a Deputy Director, Mr Bernard Ukattah, said the programme was to enable the stakeholders to discuss issues to move the industry forward.

He said one of the major constraints of the cashew industry in Nigeria was the inadequate processing capacity of our processing plants and equipment.

“Out of the 170,000 mt of cashew nuts produced in Nigeria, only five per cent is processed, while raw cashew nuts are sold to cashew buying agents for export.

“The cashew apple is eaten raw and the rest wasted because of inadequate facilities to processing other cashew derivatives e.g. cashew juice, jam, ice cream etc.

“This means exporting Nigerian jobs to other countries and this must stop.

“The only way to stop this is increasing the processing capacity of Nigeria cashew industry and harnessing capacities of other cashew derivatives sub-sector.

“This has the capacity of creating about 500,000 jobs for our youth and women in both rural and urban centres,” he said.

The permanent secretary, however, noted that funding of agriculture should not be left for the government alone.

He said there was the need to attract investment and funding outside the budgetary allocation by the government.

Also speaking, the State Coordinator, Federal Ministry of Agriculture and Rural Development, Dr Aliu Kabir, said the summit was aimed at exposing the stakeholders to ways of harnessing the potentials in the cashew industry as an alternative to oil.

Alhaji Tunde Salami, the Programme Manager, Kwara Agricultural Development Programme (ADP) said cashew is one of the cash crops that can be reckoned with because nothing is a waste in it, so, the training will avail the participants on many derivatives from cashew.

One of the Resource persons, Dr Omolola Etukudo, from Kabba College of Agriculture said at the end of the training, it was expected that cashew stakeholders must be able to add more value to cashew.

“We will also drive them on how to seek for loans to improve on their investments because I will be speaking on ‘Financing the Development of Cashew value chain and its economic relevance on the Non-oil sector.

“This will create employment opportunities for the youths to address the problem of relativeness in the society.”