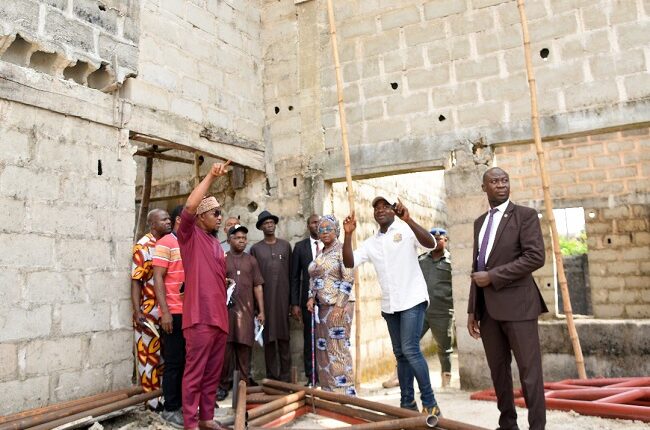 The Minister of State, Ministry of Niger Delta Affairs, Sharon Ikeazor has expressed the ministry’s readiness to commission and handover the Skills Acquisition Center at Abaezi-Egbema, Ohaji /Egbema LGA, Imo state to the Imo State Government to improve the human development indices of the region.

The Minister made this declaration while addressing journalists during the inspection of the Ministry’s intervention projects at various locations in the Imo and Abia States respectively.

Expressing satisfaction at the volume and quality of work at the facility which was designed to provide specialised training in commerce, Ikeazor said that the facility would be commissioned and handed over to the Imo State Government before the end of February 2023.

She added that the Federal Polytechnic, Nekede has written to the Ministry requesting the use of the facility as one of its campuses “so we are waiting for the approval from the Presidency on that but at the same time engaging the Imo State Government to see how we can put this to good use immediately”.

Commending the Federal Government for the approval of the projects, the Minister noted that the Ministry is presently collaborating with the State Governments in the Niger Delta region, Critical Stakeholders, Niger Delta Development Commission (NDDC) and State Representatives ( both state and federal) to ensure that projects are sited based on people’s needs and priorities adding that “the Ministry will be commissioning projects that have laid fallow over time”.

She commended the contractors for keeping the facility safe from being vandalised after 12 years of its completion while the Skill Acquisition Center at Owazza Ukwa East is at 58 per cent completion.

The Minister assured of regular inspection and assessment of projects undertaken by the Ministry to facilitate timely execution, completion, commissioning and handing over of projects to the end users to improve the livelihood of the Niger Delta people.

She stated that the projects would no doubt aid the Ministry in the delivery of its mandate of improving the lives of the Niger Delta people in line with the key priorities of the present administration.

“The Ministry is making relentless efforts in developing the region through the provision of Skill Acquisition Centres, Social Infrastructure, Environmental Protection, Erosion Control, Civic Centers, Empowerment Programmes for the benefit of Niger Deltans ” she stated.

The projects inspected and commissioned include the Skill Acquisition Center at Abaezi-Egbema, Ohaji/Egbema L.G.A, Civil Center at Nwaorieubi, Mbaitolu L.G.A, the Commissioning of the Rehabilitated Okuala Igurunta Road in Imo State.

Others are the Skill Acquisition Center at Owazza, Ukwa East, Construction of Ntigha Umuopara Amuzu Akanu Ohanze Isiala Road, Umuelem -Leru -Ngada -Lokpanta Road in Umunneochi L.G.A, Erosion Site at Umuelem Umunneochi L.G.A in Abia State, which are at various levels of completion or awaiting commissioning and handing over to the communities.

Speaking at the commissioning of the Rehabilitated Okuala, Iguruta Road (Phase 1), she said “ in line with the mandate of the Ministry to promote sustainable development, peace and economic prosperity of the Niger Delta region through the development of infrastructure such as good road network, the Federal Executive Council approved the award of the 17.5km roads project (Phase 1)”.

According to her, the road was awarded in phases due to its peculiarities while the other section of the road is being constructed by another tier of government.

Commending the project contractor, Messrs Triacta/Hartland Nig. Ltd for completing the project even with the prevailing challenges Sharon stated that “ the project would benefit the communities by easing the process of moving goods such as farm produce to urban centers/marketers, reduce time and improve riding comfort.”

She maintained that it is “the desire of the government to improve the quality of life of the people by providing such infrastructure and for the people to reciprocate such gestures by protecting government assets situated in their communities.”
She urged “the benefiting communities to put in more efforts toward the upkeep of the environment\, protection and maintenance of the facilities provided.”

The Minister was accompanied by the Member, House of Representative, representing Isiukwuato/Umunneochi Federal Constituency in Abia State, Hon. Nkeiruka Onyejiocha while inspecting intervention projects handled by NDDC in the community, she said that the ministry will act swiftly to recover the eroded area at Umuelem community by including the Erosion Site in the next budget submission of the ministry.

Inspecting Mma road at Umunneochi LGA, she said that “ Mma road is one of the projects we’ll look into because we have some intervention projects coming up through NDDC. This is a critical road linking two states (Anambra and Enugu) to Abia state and the ministry will continue to live up to expectations.”

She emphasised that the Federal Government is committed to delivering on its policies and programmes geared towards the socio-political empowerment of the people of the Niger Delta region.