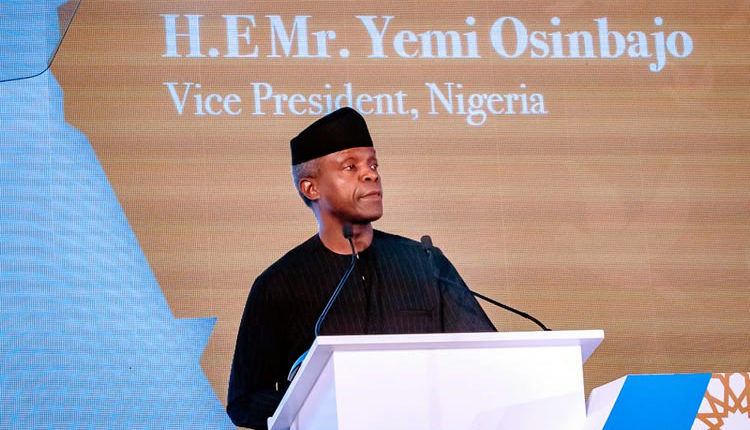 The Vice President, Prof Yemi Osinbajo, on Tuesday, said the Federal Government through the Ministry of Petroleum Resources, targets a single unit cost for crude oil per barrel.

He said one of the key mandates of the government is to drastically reduce the unit cost of crude oil production, so as to increase government’s revenue.

The Vice President who was represented by the Minister of State for Petroleum Resources, Mr Timipre Sylva, said the country had in the past few months, been faced with economic challenges caused by the sudden fall in crude oil prices occasioned by the COVID-19 pandemic.

According to him, the low price and OPEC crude oil production curtailment had also largely resulted in lower revenue generation for the government.

He said considering the current “era of scarce resources,” there was a need to; “aim at a unit cost production in single digits,” adding that; “Concerted efforts should be brought to bear to achieve and sustain this.”

While stressing government’s commitment to increasing the country’s crude oil reserve base to 40 billion barrels, Osinbajo added that this includes an increase in production capacity to three million barrels daily.

“Another key mandate of the Petroleum Ministry is to ensure the growth of the country’s reserve base to at least 40 billion barrels in crude oil as well as production capacity to 3million barrels of crude oil per day.

” We are fully committed to this mandate and confident that we will achieve the desired goal in finding more Hydrocarbon deposits in the Nigerian basins, not withstand the curtailment in production,” he said.

He said various interventions have been put in place to achieve this, noting that significant progress has been made in this regard.

His words: “We are not just saying we will reduce cost in the upstream, we are saying we have a target for it. We know that $10 oil is possible in this industry. A number of interventions are going on in terms of sharing resources, consolidating our resources so that it can be mutually utilised.

“We know that this is possible, significant progress has been made. We have cut the cost to the extent of 30 per cent. So overall, by the end of 2021, we will see, as we think it is very realistic, we will see a $10 UTC cost by the end of the year.”

According to him, this became imperative as other oil-producing countries across the world, produce less than $10 per barrel, thus the need for Nigeria to also reduce its cost.

“That is promising and also good for our business otherwise, this industry will not survive. I am sure we all know that there are very many climes where the production of oil is done at less than $10 per barrel. Except you do this, it can’t be competitive.

“Today, oil is found in various unexpected places across the globe and people have choices. The only advantage we have today is probably our quality of oil and we are one of the countries with the extreme cost of production jurisdiction in the world. We have to pull this down unless you will produce oil and find no one to buy from you because you cannot recover your cost ultimately,” he added.