FG, states, others charged on menace of land grabbing 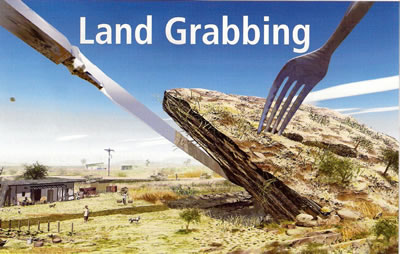 A real estate firm, Manfield Apartments, has charged federal and state governments as well as other relevant authorities to ensure they address the menace of land grabbing in the country.

A director in the firm, Mr Alex Adefarasin, gave the charge at a press conference, which took place at the Airport Hotel, Ikeja, Lagos, saying there was the need to properly address the problem to stop interlopers from encroaching on legally acquired lands and properties.

Adefarasin, while describing such act as a threat to the growth of real estate sector in the country, said the firm was dismayed by similar acts of encroachment and acts of malicious damage to its property sitting on 10 acres in Surulere area of the state by some Interlopers, in conjunction with some policemen.

Manfield director alleged that the interlopers encroached on the landed property behind the National Stadium and caused damage to some of the structures already put in place, saying this happened despite the fact that the firm rightfully purchased the land from Madam Iyalode Efunroye Tinubu family, whom he claimed was the original owner of the land.

Adefarasin described the act as illegal as the interlopers had no legal right to the facility, declaring that what the interlopers had done amounted to an affront on the Inspector General of Police (IGP) directive, who he said had intervened based on a petition on the matter to his office.

A letter emanating from the office of the Commissioner of Police, Legal/Prosecution Section, Force Headquarters, Abuja to the DIG of Police, Department of Operations, also in Abuja had counselled that “the case between the parties is being consolidated, reviewed, and report written and submitted for vetting and legal opinion, deployment of police officers to the land should thus be on the order of the court.

“In the circumstance, it is advised that police officers deployed on the land at the instance of either of the parties without an appropriate court order or due process of law as provided for the Sheriff and Civil Process Act or other extant law should be withdrawn to avert legal action against the police.”

This was just as Adefarasin added that the Efunroye Tinubu family, from whom the firm bought the land, had placed an advertorial in a newspaper distancing themselves from the “Interlopers.”

“We decry the illegal use of police in a land matter, in utter defiance of the IGP’s directive.

“Consequently, we have petitioned the IGP on this because we feel instead of resorting to self-help through the illegal use of policemen, any aggrieved party that feels it stands on a firm legal footing, should be able to approach the court of law for final adjudication,” he said.

He assured that Mansfield Apartment was a law-abiding firm that would never involve itself in any illegal land transactions.

Adefarasin further assured the investors and sales partners that there were no legal encumbrances against the firm on the land, saying there was no cause for alarm as the firm was on top on the situation.