FG, Sokoto partner on evolution of strategic plan on COVID-19

Latest NewsCoronavirus
By Olakunle Maruf - Sokoto On May 17, 2020 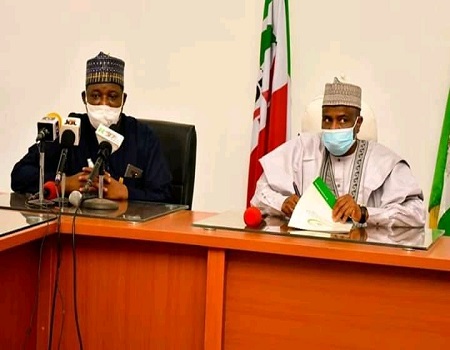 The Federal Government, Sokoto State government and other technical partners are now poised to evolve a strategic plan on the COVID-19 pandemic.

This is coming in the wake of the recommendation of a Ministerial Task Force (MTF) on the COVID-19 pandemic to Sokoto State given during the visit to the state.

Governor Aminu Tambuwal who concurred with the expert advise of the MTF assured that the state will continue to do its best in partnership with relevant stakeholders to defeat COVID-19.

This was contained in a statement signed by the special adviser on media and publicity to Governor Tambuwal, Muhammed Bello and released to journalists in the state on Sunday.

According to the statement, the governor said the work to tackle the pandemic and roll it back is still in progress, adding that: “From the start of the pandemic, the state government decided to be proactive.

“It established a Task Force which came up with a number of recommendations in line with the World Health Organisation (WHO) guidelines to which the state government has adhered.”

Tribune Online reports that the state, thereafter, requested the support of the Federal Government “when we became alarmed on the exponential rise of COVID-19 cases in Sokoto,” by reaching out to Mr President and the federal ministry for health.

Pointing out that the state will await the report of the MTF team on the best way forward in the fight against the pandemic, Governor Tambuwal said fumigation is ongoing in most public places including those in the hinterland.

The government, he added, is working closely with the Sultan of Sokoto and other stakeholders on educating the people on the prevention protocols of the pandemic.

He also stated that the government is working with UNICEF on the procurement of handwashing machines, 650 of which would be distributed across the state once they are delivered.

In his remarks, the chairman of the MTF, Dr Nasiru Sani Gwarzo said the team’s visit is in line with a directive of the federal ministry of health over concerns that unexplained deaths in Sokoto, like those of Kano State, were as a result of COVID-19.

According to him, after a tour of some cemeteries in the state capital the MTF “pleasantly reports that the number of deaths” which the governor said are not COVID-19 related “has dropped.”

He said during the visits to the cemeteries, the team studied and analysed the trajectory of deaths and found a “dramatic drop.”

Dr Gwarzo, however, explained that as epidemiologists, “we need to look at the pattern and look for an explanation. We need to find out why older people died more at a stage, although this has dropped.”

He commended the state Task Force on COVID-19 as “formidable, good and intelligent,” but reiterated the need for it to have a strategic state plan to fight the disease.

For now, he said the state government “has an excellent work plan,” but must evolve a strategic plan that “needs to be holistic and long term” in perspective.

He also gave kudos to the state on its testing capacity, holding capacity, mass use of face masks and possession of a fleet of ambulances, but observed that the operations of the later require streamlining and guidance, which he assured that the Federal Government will assist the state on.

He advised the state to improve the accommodation for doctors.

Emirates plans to cut about 30,000 jobs amid coronavirus outbreak

Doctors refusing to treat patients of other ailments over fear of COVID-19, says PTF