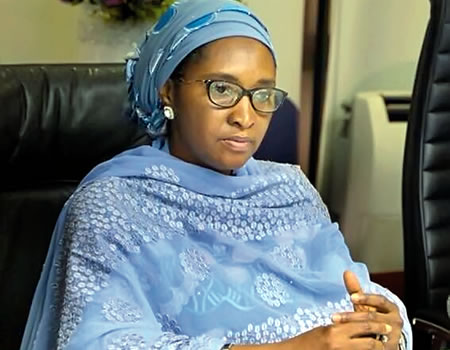 Federal Government on Friday commenced the process that will lead to the 2021 budget through an online press briefing by Minister of Finance, Budget and National Planning, Zainab Ahmed.

She unveiled a proposed Medium Term Expenditure Framework, which showed that the size of the budget would be N11.86 trillion.

According to her, projected revenue from every source is N6.98 trillion while a fiscal deficit of N5.16 trillion was being envisaged.

With this in mind, Ahmed and her team have proposed a crude oil budget benchmark of $40 per barrel for 2021.

“Thus, key reforms will be implemented with increased vigour to improve revenue collection and expenditure management,” she added.

On human capital development, Ahmed disclosed that Nigeria ranked 150 of 157 countries in 2018 and that COVID-19 pandemic will further worsen the situation.

Although Nigeria’s total production capacity is 2.5 mbpd, current crude production is about 1.4mbpd (in compliance with the OPEC+ production quota), and an additional 300,000 barrels per day of condensates, totalling about 1.7 million barrels per day.

With oil price projected to remain low and volatile in 2020, and Nigeria’s compliance with the OPEC+ cuts by reducing base production to between 1.412 mbpd and 1.579 mbpd from June to end of the year, growth in oil GDP is expected to decline in 2020.

We’re Confused By FG’s U-Turn On WAEC – ANCOPPS
PRINCIPALS of secondary schools nationwide under the aegis of All Nigeria Confederation of Principals of Secondary Schools (ANCOPSS) have also expressed surprise over Minister of Education, Mr Adamu Adamu’s announcement on Wednesday withdrawing all the SS3 students in all the 104 Federal Government colleges… Read Full Story
Abdulsalami says house not searched by EFCC
AS the investigation into the corruption allegations levelled against the embattled acting chairman of the Economic and Financial Crimes Commission (EFCC), Ibrahim Magu, entered its fourth day on Thursday, the secretary of the anti-graft agency, Olanipekun Olukoyede and some of its directors have appeared before the panel … Read Full Story
Buhari To Sign Revised N10.8trn 2020 Budget On Friday
President Buhari will on Friday sign into law the revised 2020 budget of N10.8 trillion passed by the National Assembly last month… Read Full Story
10 Aspirants To Boycott APC Primary In Ondo ? Olatuja, Factional Chairman
Ten of the aspirants who picked the All Progressives Congress (APC) Expression of Interest and nomination form ahead of its July 10 primary in Ondo State may boycott the election… Read Full Story
Why Zamfara House Of Assembly Is Sitting In Primary School
The Speaker of Zamfara State House of Assembly, Alhaji Nasiru Mu’azu has said the ongoing renovation works in the assembly complex will not hinder the lawmakers from passing laws that will be beneficial to the… Read Full Story