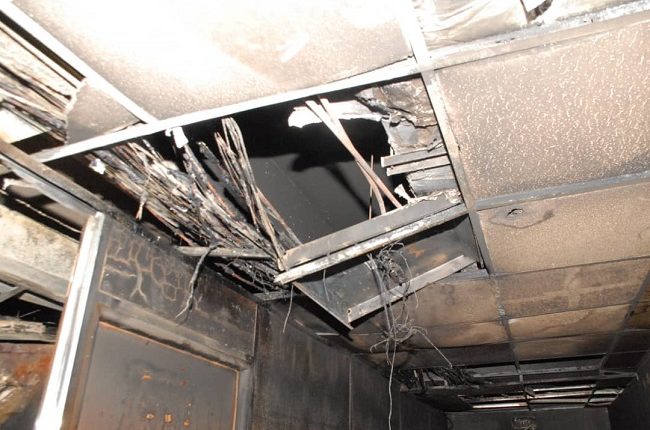 Contrary to reports in sections of the media, the Federal Government said no life was lost in the fire incident even as Government has ordered an investigation into the fire outbreak.

Nigerian Tribune gathered that the fire incident which started at about 8 pm razed both the Capital Final Accounts offices of the Ministry completely without a pin saved from the offices.

Eye-witness said it took the combined efforts of the firefighters and security personnel at the Secretariat to quench the fire.

The presence of security personnel saved the situation early hours of this morning when it was gathered that the fire after it was put out last night started again with aggression but was promptly put out with the use of a fire extinguisher.

Nigerian Tribune visited the scene of the fire incident and saw charred remains of office safe cabinets where files and valuable documents are kept, a heap of burned documents, cables and ceilings razed by the inferno.

Director of Communications, Office of the Head of Service of the Federation, Mr Abdulganiyu Aminu, had told Nigerian Tribune on Wednesday night that the fire incident occurred at a portion of Car Park at the Federal Ministry of Education wing.

He said the fire was promptly put out by fire servicemen.

It was, however, gathered the two fire incidents happened at different intervals. While the fire incident at the Car Park occured earlier in the day on Wednesday from a malfunctioning vehicle and was promptly put out, that of Capital and Final Accounts offices occurred at about 8 pm, when few staff were in the offices.

Meanwhile, contrary to reports in sections of the media, the Federal Government has said that no life was lost in the fire incident which occurred at the Federal Secretariat (Federal Ministry of Education Wing) last night.

A statement signed by the Director Press, Federal Ministry of Education clarified that two of the affected staff in the incident who have been hospitalized at the Maitama General Hospital in Abuja are in stable condition and are responding to treatment.

The statement further said, six Directors of the Ministry who visited the victims at the Maitama General Hospital confirmed that the victims were not only coordinating well but were also articulate in their speeches.

Commenting on the cause of the fire incident, the Director said, preliminary investigation indicated that the fire incident might have been caused by a power surge, resulting to a spark from an air condition, which ignited the fire.

However, a Committee has been constituted with a view to investigate and determine the actual cause of the fire and to recommend measures to be taken to prevent similar incidents in future.

“Without prejudice to the work of the Committee, I would like to dispel speculations that there is an element of sabotage in the two incidents,” Goong said.