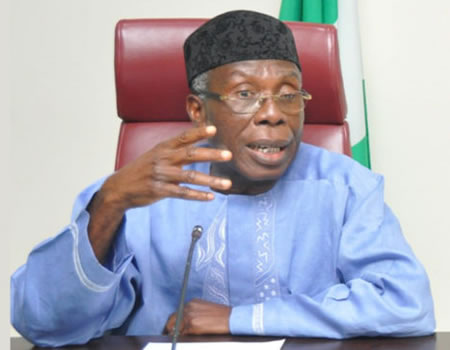 The Minister of Agriculture and Rural Development, Chief Audu Ogbeh has launched the National Gender Action Plan (NGAP) for Agriculture in order to build the capacities of Nigeria’s women.

The Minister said that the objectives of the National Gender Action plan is to build the capacities of women farmers to transit from subsistence farming to medium/large scale farming; saying that women are good managers, and their commitment to the well-being of the family and the society cannot be over emphasized.

He started further that women remain the anchor of our nations’ agriculture as they contribute immeasurably to the development of the sector as evidenced in various statistics which show women constitute 70 per cent of the small scale farmers that actually feed the nation.

The Minister however acknowledged some challenges facing women in agricultural sector to include poor access to finance and farm input such as fertilizers, improved seeds, farm machineries, agro-chemicals, access to land, market access and in some cases insecurity amongst others.

The wife of Mr President, Dr. (Mrs) Aisha Muhammadu Buhari was represented by the Special Assistant to the first lady Dr. Hajo Sani, disclosed that educating a Girl -Child is paramount for sustainable development of the society, and that when you educate a Girl-Child, you have empowered the child to be able to stand on her own.

She also believed that launching of the National Gender Action Plan will go a long way to uplift women from subsistence agriculture to modern agriculture.

The Permanent Secretary of the Ministry Dr. Abudulkadir Muazu who was represented by Director in the Ministry, Dr. Watergire Bright, during his keynote address disclosed that Nigeria agriculture and food industry are still unable to meet the demand of population of over 170 million both in quantitative and qualitative terms; assuring that Nigeria is working to reduce its food support bill of over $11 million i.e almost N1.2 Trillion per year, so that local producers can take advantage of the opportunities in order to create wealth and generate jobs for the country.

Director of Extension service in the Federal Ministry of Agriculture Mrs. Karima. Babaginda stated that the National Gender Plan on Agriculture (NGAP), is a framework for positive action which aims at ensuring that current sector policies actually yield tangible results each year, adding that it also aims to outlining rural concrete programmes and actions required for maximizing the potentials of many farmers including women practitioners in agriculture.

Meanwhile, The Federal Government has reaffirmed its commitment to create jobs for million of Nigerian youth through E-wallet System; which will reduce unemployment, increase productivity and ensure sustainable development.

The Minister of Agriculture and Rural Development, Chief Audu Ogbeh, disclosed this during the flagging-off Agric Show/ Farms Exhibition organized as part of the activities to mark the October 16, 2018 World Food Day celebration in Abuja-Keffi Nasarawa State.; the theme of this year’s agric show is, “Strategies for Promoting Export of Agricultural Products”.

He also stated that zero hunger is achievable; call on all the partners and stakeholders to join forces across board to ensure adequate founding, provision of seeds and fruits to stimulate agribusiness in order to ensure effective extension services and delivery.

Ogbeh who was represented by the Permanent Secretary in the Ministry, Dr. Abdulkadir Mu’azu, further disclosed that the Green Alternative Policy has started yielding benefits to the economy; the rice revolution has granted food security to some extent; with huge reduction on rice importation and actualization of self-sufficiency in food production.

In his address at the occasion, the Country Representative of the United Nation Food and Agriculture Organization (FAO) in Nigeria, Mr. Suffyan Koroma, stated that the concept of Zero Hunger is broader and not limited to the fight against undernourishment, as it also aims to provide people with the necessary nutrients for a healthy life.

The Country Representative who saw the FAO agenda of Zero Hunger in 2030 which is aimed at eradication of hunger and ensure sustainable development, disclosed that global hunger has rapidly grown in recent time, adding that the latest estimates of undernourished people in the World increased in 2017, for the third consecutive year.

He said last year, 821 million people suffered from hunger (11 percent of the World population- one in nine people on the planet), most of them are farmers living in poor rural areas of sub-Saharan African and Southeast Asia; the FAO agenda of Zero Hunger in 2030 will eradicate hunger and ensure sustainable development globally.

The National President of All Farmers Association of Nigeria (AFAN), Arc. Kabiru Ibrahim in his goodwill message, appreciated the efforts of the Ministry in making this year’s event a successful one, adding that farmers are ecstatic and encourage to do their utmost best to ensure actualization of food security and sustainable development. He stated, that the country was to make bomber harvest despite flooding experience in many parts of the country this year.