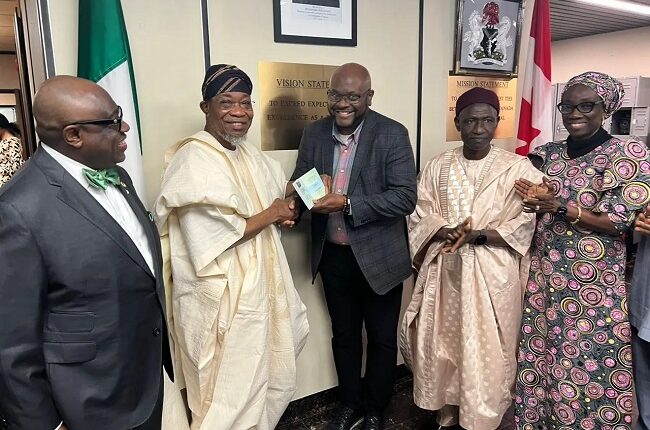 The Federal Government has rolled out the new enhanced passport and commissioned the central passport production centre in Ottawa, Ontario, Canada.

Minister of Interior, Ogbeni Rauf Aregbesola, speaking at the launch in Canada, said Nigeria is amongst the first five countries in the world to have this enhanced passport and the first in Africa.

He noted that with the rollout, Nigerians living in Canada would now have access to the highly coveted 64-page 10-year validity passport.

Aregbesola in a statement by his Media Adviser to the Minister, Sola Fasure, on Wednesday in Abuja said the enhanced version being presented was the latest technology in identity documentation.

He said, “It comes with additional security and in various categories, including the 64-page-10-year validity Passport which is quite convenient for frequent travellers.

“The document is of higher grade with additional 25 security features than the one currently in use. It is polycarbonate in design and therefore water-resistant. It cannot be compromised by counterfeiters and identity thieves,” the Minister revealed.

The Minister commended the Nigerian High Commissioner to Canada for his commitment to ensuring that Canada had its own passport production centre, stating that with the new enhanced passport, Nigerians will now apply, pay and book appointments online directly from the Nigeria Immigration Service Portal.

“It is important that all applicants go through the Nigeria Immigration Service portal and follow the protocol laid down, pay the right fee and go for biometric data capture on the stipulated date. The waiting period after data capture for fresh applications is six weeks and three weeks for renewal. This timeline is to enable NIS to verify and validate the claims of applicants and confer integrity on the passport issued. It is a reasonable provision in passport administration by the global standard.

“The order of appearance of the applicant’s name especially has been an albatross for many. We have introduced a tracking mechanism in the application process, to enable applicants to monitor the progress of their application. We shall continue to introduce necessary and available innovations to passport administration in order to best serve applicants in our quest for establishing citizenship integrity,” the Minister stated.

The Nigerian High Commissioner to Canada, Mr Adeyinka Asekun in his own remarks, commended the Minister of Interior, Ogbeni Rauf Aregbesola and the Acting Comptroller General of Immigration, Isah Idris Jere, for their commitment to the launch of the enhanced passport in Canada.

He stated that thanks to the good work the Immigration is doing, Nigerians in Canada now have access to a 64-page 10-year validity passport which is only available in the United Kingdom and the United States of America outside of Nigeria.

“I will advice that Nigerians living in Canada should apply for the 64-page 10-year validity and you can apply at least one year before the expiration of the current passport,” the High Commissioner stated.

Also speaking during the event, the Acting Comptroller General of the Nigeria Immigration Service, Idris Isah Jere, noted that until all applications on the old platforms are cleared, the passport Issuing desk in Canada will continue to issue both documents concurrently.

“May I mention that the enhanced e-passport and the electronic passports are both running currently until a convenient time when all our centres would have been fully migrated to the enhanced e-passport noting that cases of delays in processing passports will be taken care of, provided applicants abide strictly with the application guidelines by ensuring that they make use of the online application and payment platform, as well as synchronize the data on their passport application with their information in their National Identity Number (NIN),” he said.

At the event were Nigerians living in Canada, diplomats, technical partners, and immigration attachés amongst others.