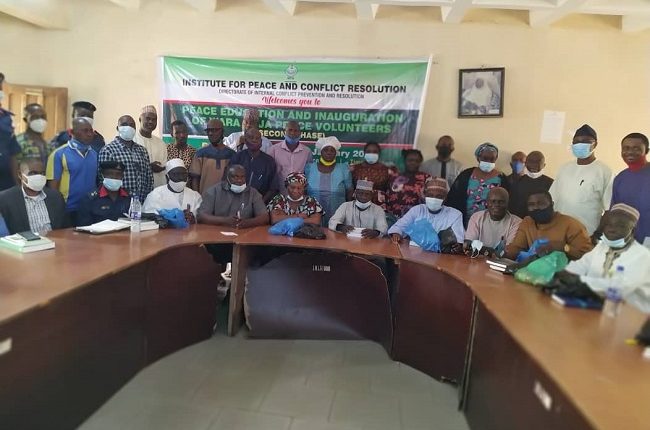 The Federal Government, in collaboration with the Kwara State government, have resolved to find solutions to a recent communal crisis between people of Wara-Oja community and Christian neighbours.

It is recalled that crisis broke out between the Wara-Oja community and the Christians over the alleged holding of a public fellowship programme in the community last year, leading to the apprehension and palpable fear in the area.

Speaking at a three-day workshop for peace education and the inauguration of the Wara-Oja peace engagement volunteers held at the Hall of Ilorin West local government council, on Thursday, Director General of the Institute for Peace and Conflict Resolution (IPCR), DrTswah Bakut, said that the Volunteer Committee, co-chaired by Special Advisers to the Kwara State governor on religion: Alhaji Ibrahim Danmaigoro (Muslim) and Reverend Samuel Adedayo (Christian), would meet with the two warring factions and find a lasting solution to restore peace in the rural community.

Other members of the committee include a member each from the Police, Nigerian Security and Civil Defence Corps (NSCDC), State Security, Jumat Nasril Islam (JNI), Christian Association of Nigeria (CAN) and National Orientation Agency (NOA)

Bakut, who was represented by Ms Hepzibah Achanya, Head of Internal Conflict Prevention and Resolution, said that there was the need to search for peace in the community for the progress and development of the country.

“Violent conflicts had led to the loss of innocent lives, displacement of a large number of people and destruction of property in several communities across the country, she said, advising that, “people of Wara-Oja should not allow our differences to destroy us, rather, we should positively make use our differences for a greater good.”

The Director-General, who said that the institute was committed to ensuring that peace culture was attained added that, “It is a great pleasure to be part of the search for peace in Wara-Oja community. As a critical stakeholder and a government agency saddled with the responsibility of peacebuilding, conflict resolution, advocacy and research, there is no better place for me to be than here to talk to you the good people of Wara-Oja, we all must toe the line of peace to make our country great.”

He commended the state branch of the National Orientation Agency (NOA) for its efforts and synergy in ensuring that peace was maintained in the community.