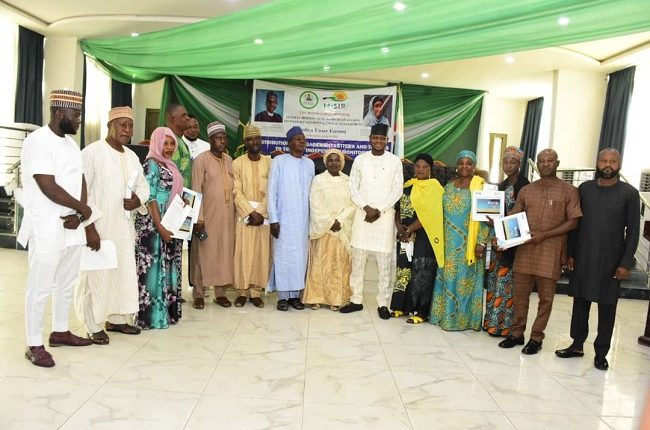 The Federal Government, on Wednesday, distributed Engagement Letters and Tablets to the trained 50 Independent Monitors for the National Social Investment Programme (NSIP) in Kogi, and charged them to carry out their assignment with the utmost sense of patriotism, diligence, and sincerity.

Farouq urged the independent monitors to carry out their assignment with the utmost sense of patriotism, diligence, and sincerity, saying the ministry would not accept anything short of the set standards.

Represented by Hajia Safiyat Sani, the Deputy Director Planning, Research and Statistics (PRS) of the ministry, Farouq noted that NSIP was created by President Muhammadu Buhari in 2016 with the mandate of lifting citizens out of poverty through a number of Social Interventions.

According to her, the social interventions include the Job Creation Programme – N-POWER, National Home-Grown School Feeding Programme (NHGSFP), Conditional Cash Transfer Programme (CCT), and the Government Enterprise and Empowerment Programme (GEEP), being implemented in 36 states of the Country and FCT.

“You may recall that we flagged off the training of 5000 Independent Monitors for the National Social Investment Programme (NSIP) in Abuja on Thursday 4th February 2021.

“The training was carried out across the country from February 2021 to April 2021.

“Today, we are here to distribute Engagement Letters and Devices to the Trained Independent Monitors. These devices are equipped with an Application that will be used to report on monitoring activities by the independent monitors.

“All devices to be distributed today are locally made in Nigeria and the Monitoring Application was designed by an indigenous Company.

“The Application, which we called the Social Investment Management Information System (SIMIS), is a mobile and web-based Application designed for Monitoring the NSIP.

“Using this Application, the Ministry sees a real-time report of activities of the Independent Monitors on the Field; we can view reports submitted and see the NSIP performance indicators by state.

“This will enable the Ministry to detect areas where there are challenges and provide greater visibility of activities happening in the field.

“Essentially, it will help us deliver on our mandate and contribute to Mr President’s vision of lifting 100 million Nigerians out of Poverty,” Farouq said.

She further explained that each Independent Monitor is expected to monitor a designated number of beneficiaries of NSIP.

She added that the independent monitors would be paid a monthly stipend of N30,000, and they must meet up to 80 per cent of their deliverables monthly to be eligible for their stipend.

“The Independent Monitors Engagement letters clearly articulate the scope of work, which include: Routine Monitoring of all programmes under the NSIP in their assigned LGA.

“Provision of an evidence-based report on findings in the field. Submission of various categories of reports in accordance with the set timelines.

She advised the Independent Monitors against assigning their responsibilities to third parties, saying every independent monitor would be held accountable by the Ministry for the task given to them.

She added that the Ministry reserved the right to disengage an Independent Monitor for misconduct or noncompliance with set guidelines and directives.

”I hereby urge you to carry out this assignment with the utmost sense of patriotism, diligence, and sincerity.

”We at the Ministry will not accept anything short of the set standards,” Farouq said.

She noted that the duration of the Independent Monitors’ assignment is for one year, from June 2021 to May 2022.

Earlier, the Kogi State Focal Person of NSIP, Mr Abdulkareem Suleiman Onyekehi, congratulated the independent monitors for being part of the NSIP program to monitor its activities.

He noted that Kogi State had been fully involved in all the four components of the NSIP program by the federal government.

He commended President Muhammadu Buhari for the initiative in providing jobs and lifting the poorest of the poor and the vulnerable citizens out of abject poverty.

He added that the federal government had injected over N17 billion into the economy of Kogi State through NSIP since its inception till date.

“Kogi State Government is a responsible government and is committed to the full implementation of all FG’s programmes in the state.

“We will ensure that the program achieved its desired goals in Kogi State,” Onyekehi said.

The 50 trained independent monitors from the 21 local government areas of Kogi State, received their Engagement Letters and one Tablet device each.

Some of the independent monitors, who spoke to newsmen; Rikiyat Ademu from Olamaboro, Yusuf Abdulraheem from Ajaokuta, and Tope Adedayo from Ijumu LGAs, commended the federal government for the initiative and promised to do their best to ensure the success of this program.

Other stakeholders at the program were: National Orientation Agency (NOA), CSOs, NGOs, DSS, EFCC, Police, Amnesty International, among others.