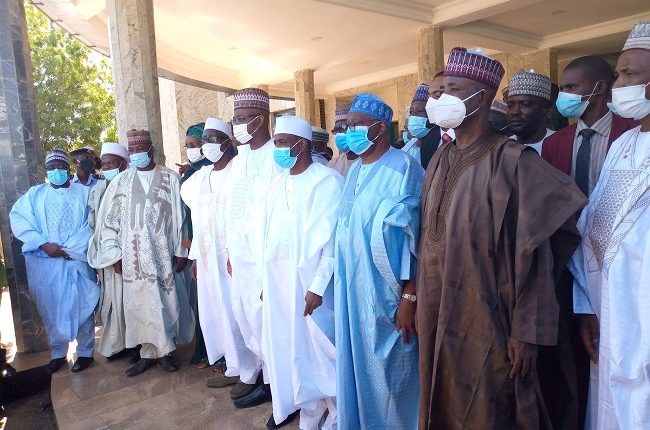 Delegates of the Federal Government had, on Monday, condoled with the Sokoto State government over the recent fire incidence that rock major part of the central market, on Tuesday, last week.

In his address, the leader of the delegates who is also Chief of Staff to the President, Professor Ibrahim Gambari, described the incident as not unfortunate but regrettable.

“Mr President sent us here on solidarity with the state and to console the people of the state over the recent fire incidence that rock the state.

“To assure you how the issue was to him, he sent a powerful delegation comprising three ministers, senator and a former governor of the state and his Chief of Staff on this visit,” he added.

In his remarks, the former governor of the state who is also a Senator representing Sokoto North, Senator Aliyu Wamakko, said Mr President was pained that he actually wanted to come by himself, but as he couldn’t due to other official responsibility, later sent a powerful delegation to come down for this condolence visits.

He consoled the government and people of the state over the loss while praying to God against such occurrence in the state.

Responding, the Sokoto State governor, Aminu Waziri Tambuwal, expressed his appreciation to the delegation of the Federal Government to the state.

He commends President Buhari for his concern to the state at this trying time, which he described as highly commendable.

“Earlier on the president has released a statement through the Special Assistant on Media and publicity to the President, Mallam Garba Shehu, consoling the traders and people of the state over the incidence.

“We thank him for this love and care from him which is what is expected of a leader like him.”

Tambuwal disclosed that the statement government is currently doing it’s possible best to reconstruct the market and offer support to the traders.

He said the loss in the market can not easily be quantified, as it does not only serve the state and it’s environment but also includes international customers.

“Over sixty per cent of the market was affected by the inferno, to tell you the extent of the damage suffered in the market.

“We appealed for the Federal Government of support not only to the state government but also to the traders who have suffered immensely due to the unfortunate incidence,” he added.

Also Speaking, the Minister for Communications, Dr Ali Pantami, prayed for the victims to be able to overcome the unfortunate setback.

He also prayed for the continued peace and unity in the country as well as the success of the administration of President Muhammadu Buhari.

Buhari approves engagement of 30,000 graduates for extension service, others