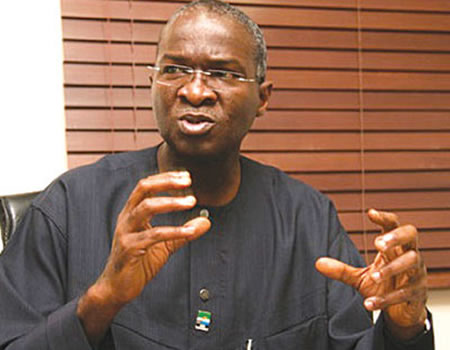 The Federal Government on Thursday disclosed the commencement of massive national housing scheme in 33 states of the federation.

It said the project is intended at delivering 2,736 housing units and also to create employment opportunities.

Minister of Power, Works and Housing, Babatunde Fashola revealed this in Abuja at the 6th national council meeting on Lands, Housing and Urban Development themed; “Building for Inclusion, Growth and Prosperity.”

According to him, apart from the artisans, 653 contractors were engaged in the pilot scheme and a total of 54,680 people were employed in the process.

He told delegates at the event that with the ongoing housing projects, the federal government had fulfilled the commitment it made at the 2016 council meeting by 90 per cent.

Fashola said: “Yes, I understand the need to get value for money and the processes that have been put in place by previous administrations to guide procurement. The question we must ask ourselves then is whether we have truly saved money and whether we have developed?

“On the evidence that is available, the country has clearly made more money from oil sales in the last decade that cannot be accounted for by way of project delivery and infrastructure development.

“But if this was not enough problem, the procurement requirements then limits the amount of advance payment Government can pay to 15% and sets conditions that overlook the level of literacy of the vast majority of our people and the nature of small businesses that they run.”

“This is because, every building we start and ultimately complete is a blow to the size of the deficit which no amount of talk can inflict.

“We understand that every nation has but while we commit to the National policy of delivering affordable housing, we must look at short, medium and intermediate streams of opportunities for employment, productivity, skill development, restoration of dignity of our people which lie within the housing delivery value chain.”

He said this became imperative to support small contractors and ensure Nigerians really experience genuine development in the built sector.

The Minister added that as a result, he had directed the legal department in the ministry to commence legal processes and recommendations to the National Assembly (NASS), in order to meet up with the new demand.

In his response, Gemade disclosed that the NASS was considering 30 per cent initial payment for contractors rather than the 50 per cent sought by the minister.

He said the bill had scaled through NASS but awaiting approval by the President.

The Senator noted that wrong attitudes of the local contractors as being responsible for the mobilization pegged at 30 per cent, adding that contractors often take-off with the money without executing the project at hand.

“Of course he has pointed out the procurement law as one of the biggest challenge in the built industry. The NASS as a fact has commenced the comprehensive amendment of the procurement act and I believe the first stages of amendment has been completed and transmitted for ascent at the Presidency.

“…three months procurement process is unnecessary for development for a nation like Nigeria. Of course 15 per cent mobilization is extremely inadequate and the NASS has taken the first step to now recommend 30 per cent mobilisation with the mind of eventually going to 50 per cent recommendation by the minister,” he added.

He acknowledged lack of proper planning as major reason behind housing deficit in the country.

Gemade further advocated for increased funding for the Federal Mortgage Bank of Nigeria (FMBN) and the National Housing Fund (NHF) in order to meet housing need of the people rather than concentrating on the private sector housing investments.