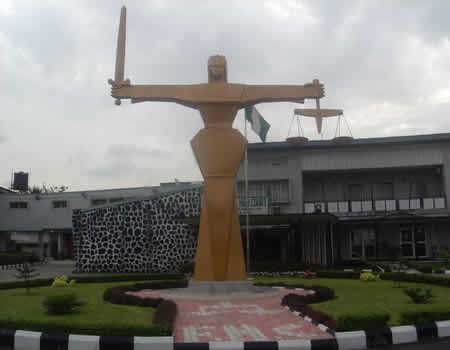 Five men on Wednesday appeared before a Federal High Court Lagos over alleged illegal importation of 661 pump-action rifles into the country without lawful authority.

The accused are Mahmud Hassan, Oscar Okafor, Donatus Achinulo, Salihu Danjuma and Matthew Okoye (who is said be at large).

Although the charge contained the names of six accused, only five were arraigned on Wednesday as the other is said to be at large.

The eight count charge was preferred against them by the Federal Government and they were arraigned before Justice Ayokunle Faji.

The charges bordered on conspiracy, importation of prohibited firearms, forgery, uttering of forged documents and bribery.

The prosecution alleged that the accused brought the rifles into the country from Turkey through the Apapa Port in Lagos using a 40-feet container.

It alleged that the accused had earlier falsely claimed that the consignment were steel doors.

It said that to facilitate the illegal importation, the accused allegedly forged a number of documents including a Bill of Lading, a Form M and a pre-arrival assessment report.

According to the prosecution, in order to evade payment of customs duty, the accused allegedly forged a bill of laden issued at Istanbul on Jan. 9, and claimed that it was issued at Shanghai, China.

In the forged bill of lading, they allegedly filled “steel door” as the content of the container instead of rifles.

They were also said to have allegedly offered a bribe of N400,000 to an official of the Nigeria Customs Service attached to the Federal Operative Unit, not to conduct a 100 per cent search on the 40-feet container.

The prosecution also alleged that the first accused, (Hassan), corruptly gave N1 million to government officials at the Apapa Port in order to prevent the search of the container by Customs officials.

In the last count, the Federal Government alleged that the accused had between 2012 and 2016 illegally imported several double-barrel shotguns, pump-action rifles and single-barrel shotguns into the country.

Consequently, the Prosecutor, Mr K. A. Fagbemi applied that the accused be remanded in custody pending trial, and sought a date for trial.

Justice Faji adjourned till Sept. 12 for definite hearing and ordered that the accused be remanded in the prison custody.