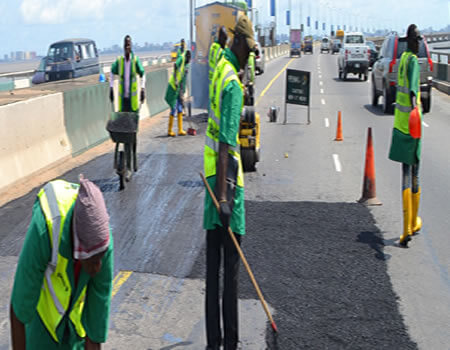 Mr Rufus Onimisi, South West 2 Zonal Coordinator of the Federal Roads Maintenance Agency (FERMA) on Tuesday in Lagos said that paucity of funds and heavy rainfall was affecting its operations in Lagos.

Onimisi told News Agency of Nigeria (NAN) that heavy rainfall had slowed down road works and compounded flooding because of the topography of Lagos being low land.

He said that the agency was consistently cleaning highway drains except for those under contract to reduce the impact of flooding from heavy rains, which he noted was currently a global phenomenon.

He said that the impact of climate change had increased ocean surge and that all roads in Nigeria at the federal, state and local government were in distress.

“When roads are flooded after rainfall, it does not necessarily mean that weep holes are blocked, Lagos is on a low lying plain and when there is rain no matter the number of drains and canals, it will take some time for the water to go away.

“In any case, I know that the state government is doing some cleaning, we also did some and part of the proposal I am pursuing in Abuja is to get money to clean more drains.

“Depending on the availability of funds we will continue the intervention on drains,’’ he said.

Onimisi added that the agency was working on getting a budgetary allocation to intervene in some critical roads in Lagos and the South West.

“We have a lot of proposals to carry out some maintenance works which we have submitted to our headquarters awaiting approval but headquarters is expecting money.

“So, that is the situation, for now, there is no money but I am in Abuja and have met with our Managing Director and I told him about Lagos roads which included Western Avenue, Sango Ota to Idiroko and other roads.

“And he (MD) also told me the challenges they have but assured that hopefully when the money is released, we will swing into action,’’ he told NAN.

Speaking on the ongoing rehabilitation of the Lagos-Badagry Expressway between Igboelerin and Agbara by FERMA, he said that both drainage constructions and road works were progressing.

Onimisi, however, lamented high rainfall slowing down rehabilitation works on the project.

“The contractors are majorly doing drainage works especially because of the rains though they have done palliatives on that section of the road to make it motorable.

“Now that the rain is subsiding, the contractor will come back on the carriageway to do some more serious work but for now they are concentrating on construction of new drainage’s where needed.

“We have identified some locations that we need to put drains to protect the road. And we have started with the very critical sections along the Agbara end,’’ he said.

According to him, about two kilometres of drains are being constructed from around Iyana Ishashi and the Agbara Market areas to tackle major flooding challenges.

“We are reconstructing drains and channelling them properly to some existing cross culverts that are supposed to take away the water,’’ he said.