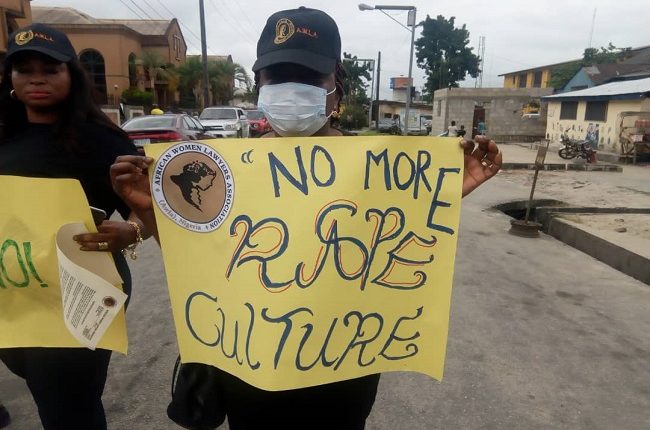 Female lawyers under the aegis of African Women Lawyers Association of Nigeria (AWLA), on Thursday, stormed the streets of Warri and environs in Delta State in a peaceful rally against rape and other gender-based vices plaguing the country.

The women lawyers were adorned in black attire and armed with banners and placards with various inscriptions such as “No More Rape Culture,” denouncing the vices which they described as no longer unacceptable in the society.

The called on the government at all levels to halt the alarming increase of rape in the country, promising to play their role as legal practitioners in checking the menace.

ALSO READ: I will raise 60,000 Millionaires before I bow out of office ― Gov Umahi

Chairperson and AWLA Delta Chapter, Angela Ofeh-Mamuzor and Precious Ovuede-Fela, who also expressed their views, frowned at the nonchalant attitude and chauvinistic tendencies of some men folk against the women in the society.

The women lawyers promised not to rest on their oars until rape and other gender-based vices in Delta State are brought to an end with culprits prosecuted and victims obtaining justice.

It will be recalled that just last Wednesday in Sapele, a 30-year-old man was arrested in for defiling an 11-year-old girl in the toilet.

The alleged rapist, who was banned with the aid of a CCTV, and simply identified as Jomaph, had sneaked into the toilet where the victim was and defiled her.

The suspect is currently cooling off in the hands of the Delta Police Command.

More Shocks As Unemployment Data Exposes Misery Status Of Nigerians
BEFORE now, economic and finance experts found it difficult to assess the healthy nature of the labour market and how to measure the impact of government policies targeted at creating jobs because of lack of real-time labour data. But on Friday, August 14, 2020, the concerns were only slightly eased as the National Bureau of Statistics (NBS) published second quarter (Q2):2020 labour statistics, the first report since Q3:2018…

I will raise 60,000 Millionaires before I bow out of office ― Gov Umahi