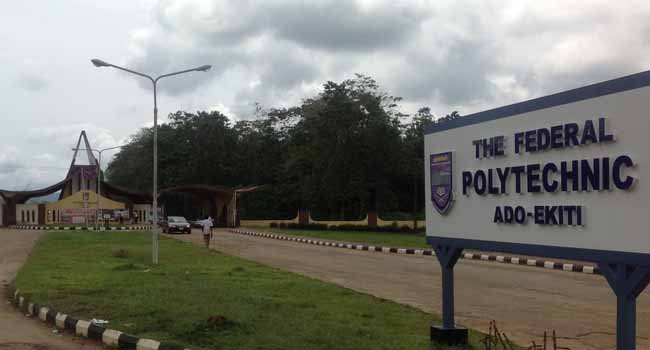 The two principal officers of the Federal Polytechnic Ado Ekiti were directed to step aside for a period of three months consequent upon an on-going restructuring.

A statement by the Deputy Registrar, Information, Mr. Ade Adeyemi-Adejolu, on Monday, said the decision was “taken by the Governing Council of the Institution during its 99th statutory meeting held on Thursday, 15th February 2018, while considering the recommendations of the report of one of its Ad-hoc Committees constituted on 7th December 2017, to look into the operations of Management in the recent past.”

According to the statement, “the Governing Council, after exhaustive deliberations, resolved and directed the Registrar, Mrs ‘Sade Adediran and the Bursar, Mr Elijah Onaolapo to immediately step aside for three months subject to a review of the decision at  the next Council meeting slated for May 2018.”

Adejolu added in the statement that the Council had “also appointed an Acting Registrar, in the person of Mr Olusola Awoniyi, who, until the Acting appointment, was the Deputy Registrar in charge of Junior Staff Matters, he is from Ekiti State.

“On the other hand, Mr Oluwole Aboluje (a Chief Accountant in the  Bursary and a native of Ondo State) was also appointed as Acting Bursar in the interim.”

Meanwhile, the Governing Council has also instituted a fact-finding panel to investigate some alleged wrongdoings perpetrated by the  Institution’s Management between 2015 and 2017, involving the former Rector, Dr Taiwo Akande and the two suspended Principal Officers of the Polytechnic.

The Investigation Committee is to submit its findings/report ahead of the next statutory meeting of Council, scheduled for May 2018.

It was gathered that a report at the personnel audit of the staff members if the polytechnic informed the decision.

A source explained that “there were alleged infractions to which the suspended officers could not give immediate answers. The management of the, therefore, decided that they should step aside for three months pending an investigation into the alleged infraction.”