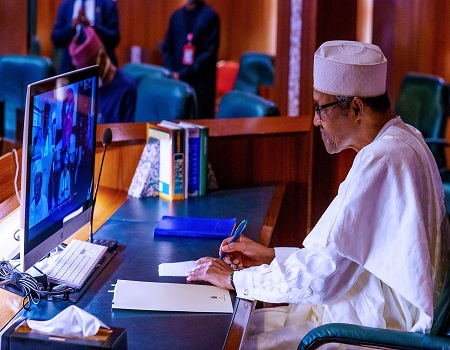 In a virtual meeting on Wednesday, the Federal Executive Council (FEC) presided over by President Muhammadu Buhari approved the sum of N2.9billion for the provision of water and fire service equipment in the National Oil and Gas Park to be sited in Odukpani, Cross River State.

The Minister of State for Petroleum Resources, Mr Timipre Slyva, disclosed this to State House correspondents after the meeting, saying that the project when completed, will provide additional infrastructural facility for the manufacturing of oil and gas components for the sector and boost economic activities in the Cross River.

He stated: “Today, Council approved the provision of water and fire service equipment in the National Oil and Gas Park to be sited in Odukpani, Cross River State in the sum of N2.9billion.

“The oil and gas scheme is to provide an environment, a corridor for citing industries that would produce components locally for the oil and gas industry.

“Of course, these parks will create jobs and also increase local capacity and participation in the oil and gas industry.’’

Also speaking, the Minister of Information and Culture, Lai Mohammed, in his remarks, said the cabinet has approved the sum of N623.7 million for the procurement of computers and printers for zonal and area commands of the Nigeria Customs Service (NCS).

According to him, “The Minister of Finance presented a memo for the award of contract for 1, 200 units of coloured printers and desktop computers for human resources and accounting management systems across zones and area commands of the Nigeria Custom Service, which was approved.

Also approved by the FEC is the sum of N610 million for the construction of a faculty of health services at the Plateau State University, Bokkos, Plateau State.

This was revealed also by

Mohammed, who said: “The Minister of Education today presented a memo seeking approval of council for the award of contract for the construction, equipping and furnishing of a faculty of Health Sciences in Plateau State University, Bokkos.

In the Aviation sector. Mohammed said that FEC approved the sum of N101 million for the provision of a flight simulator building at the Nigeria College of Aviation, Zaria, Kaduna State.

He stated that the amount is for a revised estimated cost for the construction of the building.

Mohammed explained: “The memo was presented by the Minister of Aviation and an approval was given for the revised estimated cost for the construction of Boeing 737 full flight simulator Building for the Nigerian College Aviation Technology, Zaria originally awarded for N993,484,980.60 and is being reviewed to N1,095,475,750.04.”