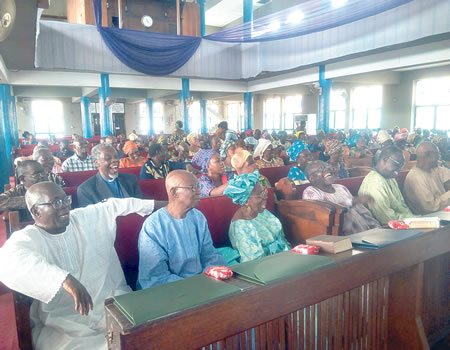 The Bishop, Diocese of Otapete Methodist Church Cathedral, Imesi-Ile, Osun State, Rt Reverend Rufus Atolaye, has admonished leaders at all levels in the country to govern with the fear of God as a means to attaining national peace.

The cleric made the call while speaking at a special service to mark the 120th anniversary of the establishment of Methodist Church in Nigeria, adding: “It is only when our leaders fear God that divine and absolute security in the country could be achieved.”

Declaring that the fear of God was the beginning of wisdom, Reverend Atolaye said that the country would be crisis-free, if only the leaders would follow the precepts of God and move closer to him.

He said sectionalism, segregation, tribalism and nepotism would only draw back the hand of development and appealed to all and sundry to embrace peace and live in harmony for the peace and advancement of the country.

Atolaye appealed to leaders and their followers across the country to humble themselves and turn away from their iniquities, maintaining that by so doing, God would reign and guide the leaders aright to be able to meet up with the expectations of the people.

He said many societies and the inhabitants were facing challenges ranging from backwardness, battered economy, hardship, famine and many more because they had departed from the way of God.

He therefore advised Nigerians to build their house on the Rock of Ages as “we are the head and we will never be tail in Jesus name”, adding that most of the leaders were greedy and self-centered in a country where “we don’t have enough for our greed but we have enough for our needs.”

Also speaking, Presbyter/Minister-in-Charge of the Methodist Church, Imesi-Ile, Very Rev. R. A. Akin-Akinlade, charged members of the church to strive hard to contribute more to the uplifting of the church and make it more virile.

Reverend Akin-Akinlade, who described the occasion as second to none, also said the work of God should not be allowed to suffer, saying all should come in unison and make the church a pacesetter.

The chairman, organising committee for the 120th anniversary of the church, Mr Niran Babanumi, appreciated God for the grace for all to witness what he described as an historic occasion.

The power of words: Are you worth listening to? (I)