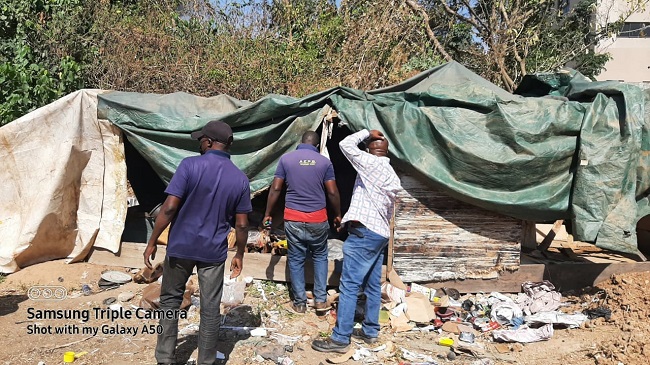 The task force in the same vein descended on some red light zones in the central business district of the city, ransacking and setting ablaze places suspected to be drug peddler’s colonies.

Senior Special Assistant to FCT Minister on Monitoring Inspection and Enforcement, Ikharo Attah, said the enforcement team will have no option but to begin arrest and prosecution of the illegal hawkers if they refuse to respect the laws.

Attah explained that the intelligence reports from the Economic and Financing Crimes Commission (EFCC) about the currency hawkers were worrisome, insisting that unless they comply with regulatory guidelines for the business, relevant forces may be deployed to sanitize the industry.

He also noted that FCT minister, Malam Muhammad Bello wants people to flourish in their various enterprises, but must do whatever they are doing within the ambit of the law.

According to him, the EFCC reports against the Wuse Zone 4 bureau de change operators, exposed so many illegalities which the present administration will not condone, but work in synergy with other agencies of government to address.

On why the task force stormed the suspected drug peddlers’ colonies, he stated that efforts need to be doubled, to ensure that the festive period remains peaceful in Abuja.

Attah said, “We had to address the issue of insecurity, removing all the shanties around the Bolingo hotels and the Churchgate building.

“We had met with them before and now to warn them to find a way to stop the illegalities and do their business in line with the regulatory guidelines.

“We want them to do their business in their shops because the Minister and EFCC have frowned seriously over the issue. We also believe that it is dangerous for them to change currencies on the roadside because they could be attacked by criminals,” He stated.

Demolition of illegal structures will continue during and after yuletide ― FCTA